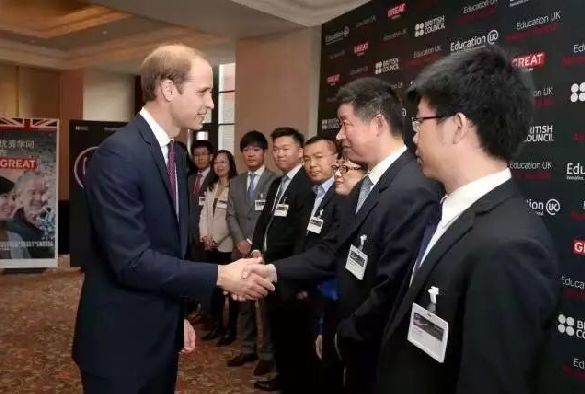 His Royal Highness, the Duke of Cambridge, has met with finalists at the British Council’s Education UK Alumni Awards and congratulated them on their outstanding professional achievements.

The Duke, on his first visit to China, thanked all UK alumni in China for their important contribution to strengthening ties between their country and the UK.

University of Liverpool graduate in International Business Law, Zhang Yonghong, met with the Duke, following his nomination in the Social Impact Award category at the ceremony in Shanghai.

After completing his degree at Liverpool, Zhang Yonghong, became a Senior Judge and Deputy Director for Enforcement Supervision at Shanghai High Court. He deals with cases involving insolvent individuals and continues his research on the possible ways of improving the enforcement procedures, based on his experiences studying in the UK.

The event was also hosted in India, with guest of honour Professor Nick Perford, Vice-Chancellor of the University of Northampton. Liverpool engineering graduate, Amit Inamdar, won the Entrepreneurial Award at the ceremony in New Delhi.

Amit said: “In retrospect, pursuing my higher education in the UK was certainly the right decision as it has helped me not only to widen my horizons but also provided me with the global exposure to further hone my creative skills.

“The UK continues to be one of the most attractive destinations for Indian students looking to build a strong career and an enriching life.”

The first Education UK Alumni Awards were launched by the British Council in September 2014 for UK alumni from India, mainland China and the USA, who have returned to their respective countries after completing their higher education studies in the UK, and graduated within the last ten years.

Rob Lynes, Director, British Council India, said: “We are committed to welcoming Indian students to studying in the UK and over the last decade, over 250,000 Indians have studied in UK’s universities and colleges.

“The Education UK Alumni Awards 2015 celebrates the impact of the experience of studying and living in the UK. The awards recognise the outstanding achievements made by business professionals, entrepreneurs and community leaders who have demonstrated how their UK education has impacted on their career.”

For the full list of finalists, please visit: http://www.britishcouncil.org/education-uk-awards/finalists