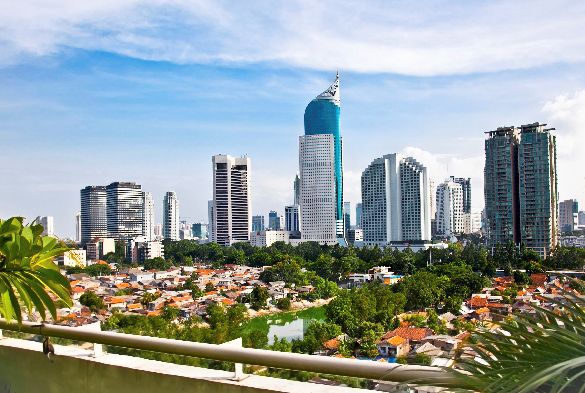 “Indonesia is a huge and diverse country. It has the fourth largest population in the world (roughly 250 million people, most of them young), and its extent from East to West is roughly equal to the distance between North America’s East and West coasts.

It is made up of 17,000 islands, including Java, Sumatra, and most of Borneo, and though it incorporates more rainforest than any part of the globe outside the Amazon and Congo basins, its population is increasingly urban.

Most of its people live on Java, and this is where Jakarta, the capital of Indonesia, is located – a lively and modern city that is home to around ten million people. But the cities of Indonesia don’t end with Jakarta – there are eleven major cities with populations of more than a million, and many rapidly growing urban centres of population are not far behind.

My initial perceptions of Indonesia didn’t amount to anything very precise. What came to mind were images of stylish batik shirts and traditional shadow puppetry, orang-utans and Komodo dragons, tall buildings and shanties in Jakarta, forests and palm oil plantations in Borneo and Sumatra. So when the opportunity arose to join a higher education delegation to Indonesia, organised by the British Council, I was very pleased to have the chance to learn more.

Standards of primary and secondary education in the country are high, but levels of provision in higher education have yet to catch up.   But Indonesia, now a fully democratic country with bold plans to extend the opportunities available to its people, has emerged from recent elections with a clear ambition to develop the standards of research and teaching in its universities.

Acutely conscious of major national and global challenges, including the need to establish secure and sustainable supplies of energy and food, to protect a fragile environment against the damage that might be inflicted by economic development, and to enhance standards of health care available to all population groups, my Indonesian hosts were keen to hear about the strengths of Liverpool’s research in these areas, and to explore possibilities for the establishment and development of partnerships to further our mutual understanding of these challenges.

In a series of events in Jakarta, I was able to meet many research leaders, from prominent universities, institutes and government agencies, in order to initiate discussions as to the practical possibilities of collaborative working that might offer mutual benefit to both researchers in Liverpool and colleagues in Indonesia.

Much work remains to be done in following up these possibilities, but I was struck throughout my stay by the enthusiasm and energy of the researchers I encountered. They were particularly interested in Liverpool’s strong record in engagement with a range of external partners, facilitating the effective delivery of the wider economic and social benefits of research. ‘Impact’ is not a term that is heavily used in Indonesian universities, but the thinking behind the concept is essential to their aims.

My visit has left me with a very favourable impression of the potential for partnered growth in the Indonesian higher education sector. The academic culture is hospitable and aspirational, and researchers value the achievements and success of British universities highly.

The city of Liverpool is familiar to them through its celebrated football teams – and through the Beatles, whose music seems to be far from forgotten in the streets of Jakarta. Academics were very receptive to my descriptions of the achievements in research and teaching that can be added to Liverpool’s claims to fame.

Enjoyable and rewarding in personal terms, the trip has also convinced me of the feasibility and potential benefit of forging closer working relations with colleagues in Indonesia.”