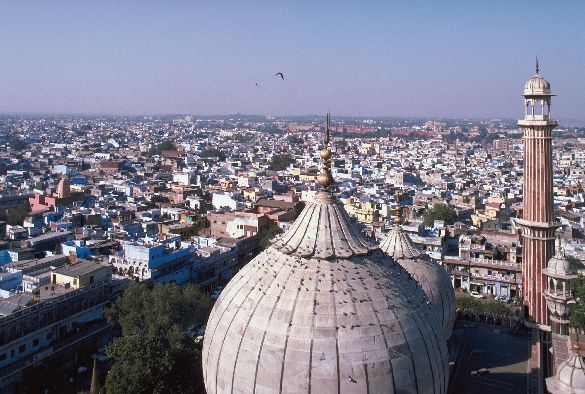 Dr Iain Jackson, from the University of Liverpool’s School of Architecture, reports from Delhi, at an AHRC workshop on heritage and urbanisation in India

“Spending time in Delhi is always fun. It is increasingly astonishing to witness the speed at which the city continues to grow and change. The new metro has made travelling much easier and the continuous band of international hotels that stretch from the airport to New Delhi tell something of the economic fertility that Modi’s government has wholeheartedly embraced.

I was back in India to participate in a jointly organised Research Councils UK-India, AHRC and Indian Council of Historical Research (ICHR) workshop on heritage and rapid urbanisation in India. I was especially curious to make this trip – not least because of the fascinating topic – but also because I would be spending time in part of the city that I hadn’t visited before.

The workshop’s location perfectly encapsulated its theme, being held in a ‘heritage’ hotel just north of old Delhi, in a district still called ‘Civil Lines’. This was the name given to the European residential districts of most Indian towns during the days of British India. From 1911 until New Delhi was completed in the 1930s the Civil Lines in Delhi housed the government following the decision to migrate the capital from Calcutta. Once a distinct and segregated area it has now been somewhat engulfed by the mega-metropolis and its 25 million residents.

Despite the rapid growth of the city, Civil Lines has managed to retain some of its historical buildings and character; from within the gardens I sat watching painters atop bamboo ladders at breathtaking altitude applying continuous coats of whitewash to maintain these pristine stucco facades and colonnades.

It was within this privileged enclave that we set about discussing the theme that had brought 30 British and Indian academics, curators, cultural practitioners and civil servants together for two intense days. The University of Liverpool was well represented with Dr Ian Magedera from the French department also invited to join the delegation.

We sometimes narrowly think about, and perhaps even define heritage, as being only about objects, artifacts and buildings – and of course it certainly includes those things, but this workshop was also concerned with thinking about the intangible and ephemeral. There is such a rich heritage informed by food, stories, dance and working practices, amongst many other expressions of intangible heritage – all of which is highly vulnerable to rapid urbanisation, in the same way that a historical building might be.

The discussions seemed most fruitful and rich when we discussed the connections between the geographical and spatial, and usage and narrative. If India desires to create meaningful and successful cities that include the participation of its wonderful past (both ancient and recent) then it will need to embrace these stories, to document and record cultural practices, as well as the quotidian and even mundane events. It is, after all, people’s engagement with a place, their memories and practices that really adds life and value to our city streets, public spaces, monuments and buildings. The challenge is all the more pertinent as 70% of development in India is informal and largely unplanned.

The final session was concerned with setting out an agenda for future research questions and themes, and there is undoubtedly a lot of interesting projects to be started and old problems still left unsolved that future research can address.

The AHRC, through the Newton-Bhabha fund, is eager to be a major contributor and partner in funding good research into this area, and I hope that the University of Liverpool will continue to develop its partnerships in India through our fellowship programme and research projects. These are very exciting times to be working in India and hopefully helping to shape the cities in a sustainable and meaningful way.”