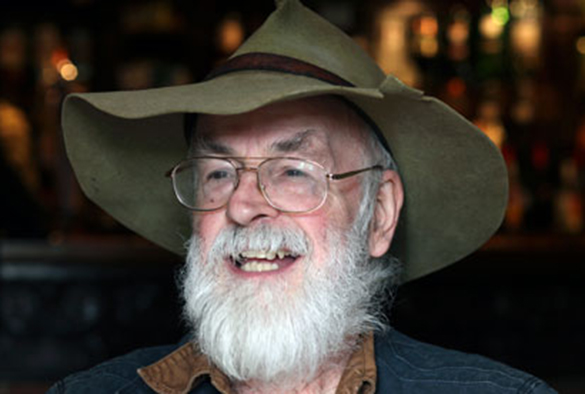 “Terry Pratchett, whose death was announced last week, is (the present-tense is necessary) loved in a way few writers are. The nature of this love is partly personal – the response saw on Thursday from friends who knew him much better than I did was deeply-felt.

So many – fellow writers and colleagues – have commented that he was a good man to be with and learn from. It is partly the way he responded to his vast fandom: when he interacted with his readers it was with that cheerful sense of appreciation, even self- self-mockery, which is possibly unique to the science fiction/fantasy world.

He gave you a sense that you were not a customer who bought his books; you were a person who liked them and, therefore, probably liked some of the things he liked. You had things in common: you could smile at the same jokes.

But the main fount of this love is the work itself. The forty Discworld books alone (Pratchett also wrote many other novels, including the “Truckers” and “Johnny” series for children and the “Long Earth” science fiction sequence, written in collaboration with Stephen Baxter) are a major contribution to literature.

Beginning with The Colour of Magic in 1983, the sequence moved from being an affectionate satire of post-Tolkien fantasy to a remarkable deconstruction (or celebration?) of absurdity in all walks of life, with a recurring cast of witches, wizards, Watchmen (of numerous species), and metaphoric personifications such as Death—who speaks in block capitals and rides a white horse called Binky.

His books have been translated into at least 37 languages. The greatest writer of humorous fiction of our time, Pratchett managed to combine the jokes –puns, mock-pedantic footnotes, comic stereotypes – with a deeper, darker moral concern.

From mock-fantasy, the Discworld becomes place where metaphor and reality are not so very different and a stage where change can be examined. In later novels such as Going Postal or Raising Steam we see the city of Ankh-Morpork becoming more “modern” as new institutions or inventions (the Post Office; the Railway) enter the scene, and the political management of change by the Machiavellian “Patrician” Vetenari and the hard-boiled copper Sam Vimes comes to the fore.

A long-running joke (which spun off into the “Science of Discworld” series co-written with biologist Jack Cohen and mathematician Ian Stewart) involves the contrast between Discworld (operating through magic and story) and our science-dominated Roundworld (where we too strive to paint stories upon the world we live in).

Throughout, there is the personal morality that fires the indomitable witch Granny Weatherwax: “You shouldn’t treat people like they was characters, like they was things.” There is a fierce exasperation in the Discworld books, but there is also a deep, optimistic love for humanity in all our stupidity and silliness. It is this love and optimism to which Pratchett’s readers responded.

Pratchett was also (and here we return to my first paragraph) a man who took his task as a writer of social commentary seriously: never solemnly or patronizingly; but seriously. He let it be known on so many occasions that books and libraries are important (perhaps his most loved character was the Librarian of Unseen University: now an orang-utan whose “rolling back of the upper lip to reveal more incredibly yellow teeth than any other mouth the university council had ever seen before” gives him job-security) .

His “L-Space” (all books, in all libraries, are connected) uncannily mirrors the way knowledge is seen as a network. Jokes about dangerous magical grimoires remind us that what totalitarian regimes of all kinds fear most is a “subversive” book.

The popularity of the Librarian led to support for the Orang-Utan Foundation, devoted to rescuing this endangered species. More recently, on being diagnosed with early-onset Alzheimers, Pratchett tirelessly lent support (both moral and financial) to publicising and researching the condition.

Yet the books have the final say. In 2000, the Science Fiction Foundation published a book of essays on Pratchett’s work, picking up on a phrase which was beginning to be used about him: GUILTY OF LITERATURE.

Rather than “transcending genre”, he showed what it was possible for a writer of fantasy to do by using the genre. Any page from any of his novels will demonstrate his gift for the absurd, his rapier-sharp puncturing of pomposity and pretension, his love of language, his ability to manipulate the conventions of story, and his playfulness; but with time comes the realisation that comic characters such as the trainee witch Magrat Garlick or Sam Vimes’s wife Sybil have become complex people you care about.

He had the greatest gift any comic writer could have: that of drawing readers into his world and making its creation seem so easy and effortless.

Pratchett’s death was announced in a tweet in Death’s famous block capitals: AT LAST, SIR TERRY, WE MUST WALK TOGETHER. His readers throughout the world got the joke, and applauded ruefully.

For me at least, it was a privilege to read him, to write about him, and to be a librarian in a world where a librarian is to be the butt of his best jokes.