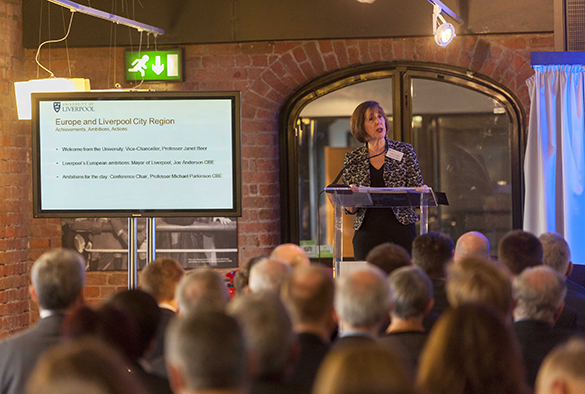 Liverpool’s identity as a European city was developed at a major conference organised by the University of Liverpool and featuring speakers from across the continent.

The Europe and Liverpool City Region: Achievements, Ambitions and Actions event was opened by the University’s Vice-Chancellor, Professor Janet Beer and Mayor of Liverpool, Joe Anderson, who told a packed house that the city “has and always will be pro-European”.

Former Observer editor, Will Hutton banged the drum for Europe’s positive influence over UK cities, in a powerful, passionate keynote speech that was welcomed by sustained applause from an audience of delegates representing some the country’s most influential public and private sector organisations.

Will Hutton, now Principal of Hertford College, University of Oxford, said: “We do share a civilisation. We have much more in common with the French, Germans, Italians and Spanish than popular debate ever allows.”

He added: “Are we really confident that market capitalism is not going to throw up all the depression and violent disturbances that took place in the 1870s and 1880s? Are we completely convinced that will never happen again?

“Could it be that the period between 1945 and today is actually unusual, and that it is normal to be like it was between 1870 and 1940? That period of history may be coming at us again.”

“Could it be that the period between 1945 and today is actually unusual, and that it is normal to be like it was between 1870 and 1940? That period of history may be coming at us again”

The lecturn was then passed to representatives from across the continent, including the European Commission’s Dr Lewis Dijkstra and Dr Christian Svanfeldt; as well as Eurocities’, Anna Lisa Boni; all of whom suggested successful urban approaches for Liverpool to follow.

This theme was continued as delegates from Finland, Spain and Denmark delivered insightful presentations on the challenges and opportunities facing second tier cities in their nation states, from Tampere to Barcelona and Aarhus.

The conference, hosted at the Merseyside Maritime Museum, then asked how the Liverpool city region can contribute to the national agenda, and featured “proud scouser” and Deputy Director, Economic Policy in the Deputy Prime Minister’s Office, Stephen Jones.

“Passionate speeches from the Vice Chancellor and Mayor, and an electrifying speech by Will Hutton in support of Europe, set us on our way brilliantly. The rest of the senior speakers kept up the quality throughout the day.

“A large and distinguished audience committed to the principle of Liverpool city region engaging with, and contributing even more to, the European cause in future. The conference was the beginning of an important conversation which the University intends to lead as part of its civic engagement mission.”

A video of the day’s proceedings will be available at the Heseltine Institute for Public Policy and Practice website. Live updates were also posted on @livuniheseltine throughout the event. For an in depth look at the conversation around the issues, and to join the debate, search for #europeandlcr One thought on “Liverpool “always will be pro European””