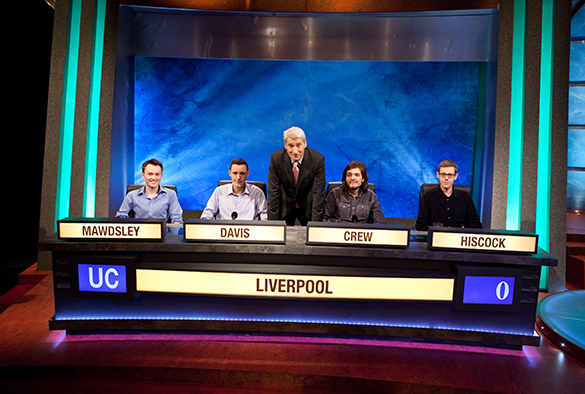 The University of Liverpool’s University Challenge team reached the end of the road last night, losing to Durham University in the quarter-finals of the BBC2 quiz.

But the team, made up of captain, Declan Crew, Ben Mawdsley, Jem Davis and Hugh Hiscock, earned a spot in University history as one of its most successful.

And rather than feeling down, French PhD student, Hugh used the opportunity to call for more “gender balance” among competing teams on the show.

He said: “I think there needs to be some sort of policy reform on the gender balance. The whole show feels very male dominated.

“I think some kind of review to get more women involved would be really good, it’s not really representative of the student population.”

Hugh says he hopes universities will consider this when choosing from applicants for each team, a process he says everyone should feel confident about entering.

“Staging the late comeback against Bristol was a highlight but the whole thing has been a bit of an adventure. We threw the team together – we didn’t really know each other before – and it was all a really good laugh”

Hugh said: “I only did the trials out of curiosity really and ended up getting that far. Anyone with a thing for obscure facts, or who always watches and shouts at the television, should give it a go.”

Hugh and his team-mates finally crashed out in last night’s show, just one step away from a semi-final spot. They had already claimed the scalps of University of Bristol, Glasgow and Sheffield before a first quarter-final setback against St Peter’s College Oxford.

For Hugh, the highlight was the fight back against Bristol.

He said: “Staging the late comeback against Bristol was a highlight but the whole thing has been a bit of an adventure. We threw the team together – we didn’t really know each other before – and it was all a really good laugh.

“Even after last night’s match, we weren’t down for long. We put it into perspective and realised we’d had a good time.”

Following the defeat, host Jeremy Paxman said the team “never really hit their stride”, a sentiment echoed by Hugh who felt he and team-mates just “couldn’t get the momentum going”.

Faster on the buzzer

He said: “I think they were just faster on the buzzer and the questions didn’t really fall for us. They got off to a really good start and we just didn’t seem to find our form.”

Durham University will now go on the semi-finals of the competition, with victory taking them to a place in the Grand Final in April.

Hugh added: “I hope we did the University proud and raised the bar for next year’s team.”

More
University Challenge team one step away from semi-finals