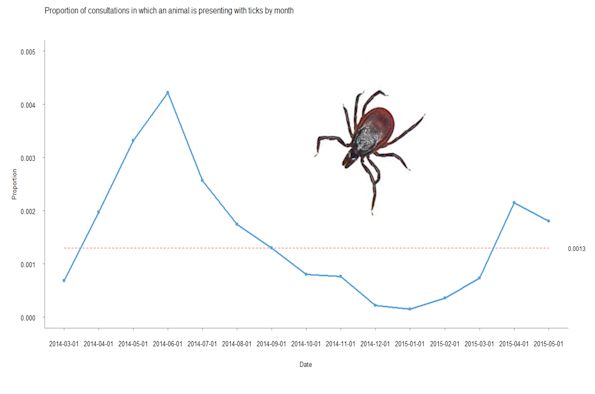 Researchers from the Small Animal Veterinary Surveillance Network (SAVSNET)  have identified that now – mid-Spring – is the time when ticks are becoming more prevalent, and they urge the public to be extra vigilant.

Ticks live on the ground but feed on warm blooded animals. They increase their feeding behaviour as the temperature rises each spring. As well as causing local irritation and infection of the skin, they can also transmit diseases such as Lyme disease and tick borne fever.

Researchers from SAVSNET, a partnership between the University of Liverpool’s School of Veterinary Science and the British Small Animal Veterinary Association (BSAVA), analysed data from a network of veterinary practices across the UK, to ascertain the number of consultations where ticks were seen on pets.

University Epidemiologist, Dr Fernando Sánchez-Vizcaíno Buendía, said: “Using these counts, we are clearly able to identify the tick season of last year, but perhaps more importantly, have strong evidence that we are now at the beginning of the tick season for 2015”.

Although ticks can occasionally bite at other times of the year, according to researchers, people working and playing in heavily vegetated areas should be aware that tick activity is now on the increase and pet owners should talk to their veterinary surgeon about using one of the several tick treatments on their pets.

In addition, people who have been out walking in tick infested areas should perform a thorough check of themselves (including clothing) and their animals. Any ticks found should be carefully removed using an approved method – if people are uncertain they should contact their GP if the tick is on them or contact their veterinary surgeon if it is on their pet.

According to Sally Everitt, Head of Scientific Policy at the BSAVA, “Most ticks seen in the UK are likely to be native to this country. However, we are aware that as pets travel more widely, and also as animals from other countries are adopted by people in the UK, there is the potential to import both different types of tick and ticks carrying infectious agents, not normally present in the UK, which can cause serious diseases such as erlichiosis and babesiosis.

“Although the requirement to treat pets for ticks before re-entry into the UK has been removed the need has not”.  Tick prevention treatments should be applied before and during travel, and animals should be checked regularly and visible ticks removed.

However, if any ticks are found in the UK, particularly on recently imported animals, BSAVA recommends they are submitted to either the Tick Recording Scheme”(https://www.gov.uk/tick-recording-scheme) or the Big Tick Project (http://www.bris.ac.uk/cabot/news/2015/big-tick-project.html).

Professor Matthew Baylis from the University of Liverpool’s Institute of Infection and Global Health said: “Government scientists monitor the number of cases of Lyme disease which can be caught from ticks, and although rare, have noted a gradual increase in number of cases since reporting began in 1986.

“Several factors may be contributing to this including increased awareness of Lyme disease, the growth of wild deer populations, climate change and improved diagnostic testing. It is also possible that as people spend more recreational time in highly vegetated areas that there is more opportunity for contact between ticks and animals and humans”.

This latest research looking at client visits for ticks was made possible by data from SAVSNET, which works with veterinary practices to collect anonymous pet health data in real time from across the UK.

Dr Alan Radford from the University’s Institute for Infection and Global Health, added: “SAVNSET data represents a unique opportunity for both members of the public and veterinary scientists to better understand the health and disease of UK pets. This project also shows how animal surveillance data can help inform people about their own health”.