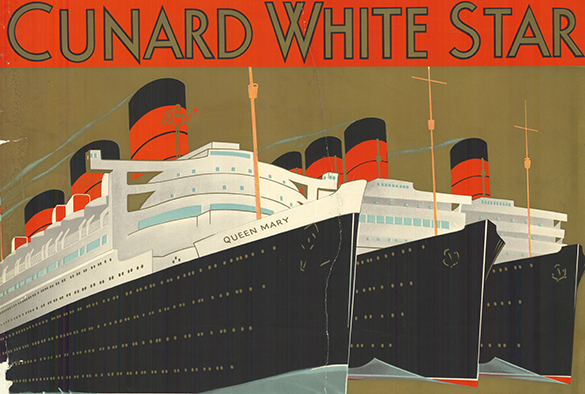 The University of Liverpool’s unique Cunard Archive is being exhibited to celebrate the arrival of the Three Queens in Liverpool, as part of the firm’s 175th anniversary festivities.

Occupying more than 400 linear metres, the archive charts the company’s growth and development, all the way back to its first incorporation in 1878. It contains most of the surviving business records, including Chairman’s and Board of Directors’ papers, and account and shareholder records, as well as unrivalled photographic images covering ship construction and life on board, alongside magazines and press cuttings.

The archive is held by the University’s Special Collections & Archives (SC&A), housed in the Sydney Jones Library, and also site for the Cunard 175 – a voyage through history exhibition, curated by Cunard Archivist, Siân Wilks.

SC&A Manager, Jenny Higham said: “The archive is an unrivalled source for research into all aspects of the social and commercial history of the British mercantile marine in peace and war; into the ships themselves, the passengers they carried, and the crews who served on them.

“Throughout its history, Cunard has held a particularly strong affinity with the people of Great Britain – but nowhere more so than in its spiritual home of Liverpool”

“Cunard’s wide sphere of activity and its longevity are such that the passion for information is global, and SC&A answer enquiries, and host research visits from all over the world.”

The University acquired the archive in 1972, in the wake of Cunard’s decision to relocate its headquarters to Southampton from Liverpool a decade earlier. Fearing it could be broken up and fall into the hands of foreign collectors, the University was chosen as an appropriate repository. It also includes the Cunard Associated Deposits, a collection of items deposited by individuals with personal connections to the firm.

Jenny said: “Our Cunard 175 – a voyage through history exhibition represents Cunard’s rich heritage through original documents and photographs, introducing visitors to the history of the Cunard Company through themes such as life on board and serving the country.

“Some of the highlights include a passenger list from 1842, when Charles Dickens travelled on board the Britannia, a bound copy of the Lusitania Daily Bulletin from 1912 and photographs depicting Cunard’s service during the Second World War.”

The exhibition is open to the public throughout the week, and at weekends, until September 1. Following this, from September 14, a collection of original Cunard promotional posters from the archive will be on display in the Victoria Gallery & Museum (VG&M). Eric Flounders, the firm’s public relations manager for 27 years before retirement in 2011, will also be giving a talk in the VG&M’s Leggate Theatre on October 29.

Jenny added: “Throughout its history, Cunard has held a particularly strong affinity with the people of Great Britain – but nowhere more so than in its spiritual home of Liverpool.”

Cunard 175 – a voyage through history is on show in the Sydney Jones Library’s Special Collection & Archives until September 1. SC&A opening hours are 9.30-4.45pm Monday to Friday. The exhibition is also viewable at weekends during these hours. Access is via the Sydney Jones Library reception. To ensure entry, visitors from outside the University will need to show some form of identification, such as a bank card or travel pass.

To find out more visit: http://www.liv.ac.uk/library/sca/index.html 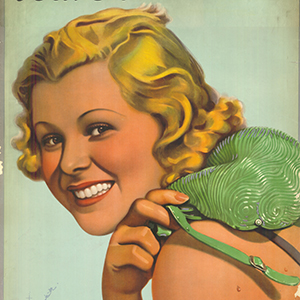