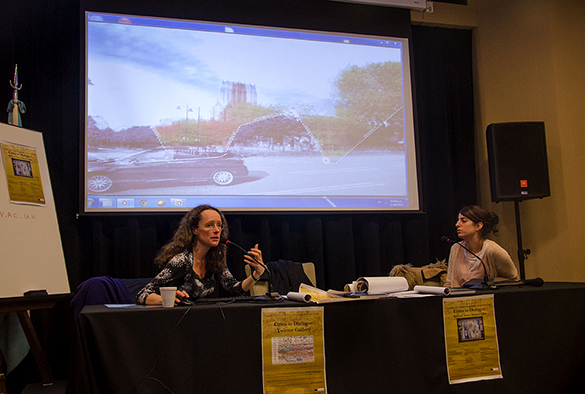 Professor Claire Taylor is a Professor of Hispanic Studies in the University of Liverpool’s Department of Modern Languages and Cultures. She traveled to Uruguay and Argentina for the South American leg of The Latin(o) American Digital Art project.

“I have just returned from a hectic trip to Argentina and Uruguay where, along with my Research Assistant, Dr Jordana Blejmar, I ran a series of impact and engagement events targeted at different communities and audiences in Buenos Aires and Montevideo.

These events stem from an AHRC Fellowship that I was awarded in 2012 for a research project on Latin American Cultural Production Online, which then led to my current AHRC Follow-On Funding project, under which we’ve been running exhibitions, workshops and other events from July last year.

We firstly went to Montevideo, the capital city of Uruguay, where we met up with several of the city’s leading artists, visited art galleries and exhibitions, had lunch in Montevideo’s leading literary café, and ran an evening presentation entitled Cities in Dialogue / Ciudades en Diálogo.

”We were aiming to explore how social media can be used for artistic purposes, and can be a way of getting audiences to become co-creators in the work of art”

This was held at the historical Cabildo in Montevideo, and involved artists we’ve already worked with as part of our project; such as Brian Mackern, and others who were new to us, including artist and documentary maker Guillermo Amato, curator Rosana Carrete, and researcher Amalia Lejavitzer.

Next stop was Buenos Aires, where we participated in the world-famous E-Poetry Festival – an exciting event that brings together researchers and practitioners, with some of the latest techniques in digital media being performed live on stage. This was the first time the festival had been held in Latin America, so we were particularly pleased to be running a panel there and presenting our project.

Held in the stunning surroundings of the Teatro Margarita Xirgu for the first day, and then in the aptly-chosen venue of the Centro Borges, the festival provided an exciting opportunity to see new digital artworks and digital literary works live as they are being developed by their creators.

We also ran a workshop on digital art and curation which took place at the Escuela de Defensa Nacional in Buenos Aires – a venue which has recently started on a programme of artistic and cultural events, so we were particularly pleased to be invited along to present there.

What we aimed to do throughout all of these events was to try out new forms of audience engagement with digital art. In particular, we were aiming to explore how social media – such a ubiquitous feature of modern life – can be used for artistic purposes, and can be a way of getting audiences to become co-creators in the work of art.”

To find out more about the The Latin(o) American Digital Art project, visit https://latamcyber.wordpress.com/ 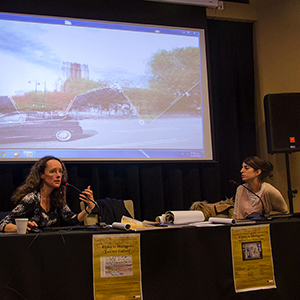