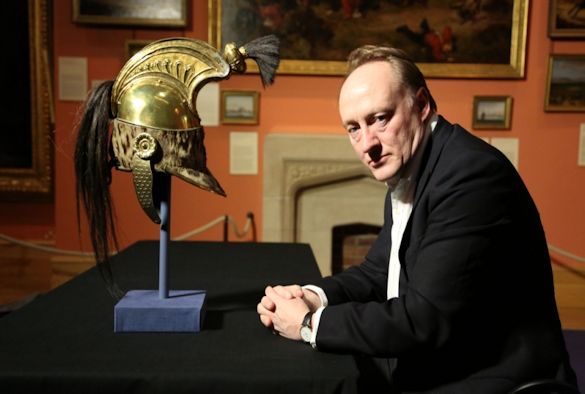 Professor Charles Esdaile, from the Department of History, is the author of numerous works on the Napoleonic period including `Napoleon’s Wars: An International History’ .

“Waterloo was one of the most awful and costly engagements in the history of Europe. It cost the lives of many thousands of British, German, Dutch and Belgian soldiers – and left many others horribly maimed and in many instances reduced to a life of destitution.

It is therefore all too right that we should remember their sacrifices – and all the more so as the threat which they faced down was exactly the same as the one that raised its head again in 1914 and 1939, namely the establishment of a colonial empire in the heart of Europe.

Given this, it is deeply depressing to discover that the BBC’s chief contribution to the bicentenary has been to recast itself as the Bonapartist Broadcasting Corporation.

I refer, of course, to the twin documentaries on Napoleon, the one on Radio 4 and the other on BBC2, that have been presented by the well-known author, Andrew Roberts.

Before going any further, let me hasten to allot credit where credit is due. Roberts is a writer of real quality who has produced some excellent works in the past and much of the detail that he retails is both accurate and of great interest.

That said, it is impossible for me, as a historian of the Napoleonic epoch, not to take issue with him.

For and against Napoleon

Where, then, to begin? Historians have been deeply divided about Napoleon ever since his death on Saint Helena in 1821. There are those who loathe the emperor and all his works and who see him as little more than a warlord and conqueror with a brilliant publicity machine. And then there are those who either see him as a veritable apostle of liberty or, at the very least, are prepared to accord him a major role in the modernisation of Europe.

To put it mildly, Roberts fits into the second of these categories. As he has already argued in a massive biography of the emperor entitled Napoleon the Great, for him, the French ruler was a hero.

He presents Napoleon as a man of courage and determination, who showed just what difference even the most insignificant of individuals can make to the world in which they live. And a man of genius, who built a strong and beautiful France on the basis of the principles of 1789.

A man of vision, who was for all his life driven by a commitment to the principles of administrative rationalism and equality before the law. A man of the future, who wanted to establish a European Community. A man of tolerance, who emancipated the Jews. A man of decency and kindness who was warm, affable and devoted to his family.

And, most of all, a man of peace, who throughout his career was dogged by the refusal of the affronted and terrified powers of Europe to cease waging the war against the French Revolution upon which they had embarked in 1792.

All this makes for a beguiling story – and Roberts tells it with great verve and commitment. The trouble is, alas, that it is but a story. Roberts can be challenged on almost every count. Space does not allow for a full critique of his views, so I will confine myself to some remarks on the international history of the period.

The reality of empire

In brief, even assuming that Napoleon actually stood for them, the idea that France was faced by a relentless crusade against the ideals of the Revolution is simply untrue. As even the most cursory analysis shows, the history of the Napoleonic Wars is essentially one of a long series of failed attempts somehow to come to terms with Napoleon and find a way of integrating him into the international order.

Austria, Russia and Prussia all successively tried policies of détente and even military alliance, only to find that the emperor was an impossible partner who rode roughshod over their interests. Even Britain essayed compromise peaces in 1802 and 1807. In the end what we have is a story of the powers of Europe gradually coming to the conclusion that there was no option but to fight.

So the chief factor in the overthrow of Napoleon was Napoleon himself. All this is glossed over by Roberts – and the fact is that he therefore stands accused of doing nothing more than rehashing the famous legend of Saint Helena the apologium-cum-manifesto that the emperor put together during the six years he was in exile between 1815 and his death in 1821.

This prompts another thought. “Write down everything I say,” Napoleon told the small band of courtiers who followed him into exile, “and I will make your fortune”. Seemingly, this is advice which continues to resonate down the ages, and so it is that we are left with a weed that continues to spring forth no matter how often it is cut back by the secateurs of academic argument.

How sad it is, then, that in this month of all months the BBC should so dishonour the memory of all those who died in the fight against the exercise in conquest, looting, exploitation and personal aggrandisement that is all the grand empire stood for.”