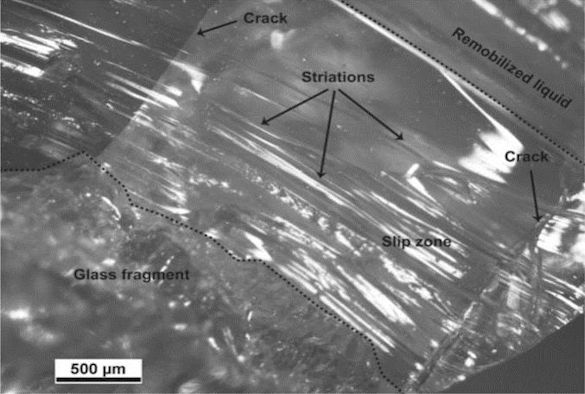 Photograph of the slip zone in plane view.

A new discovery in the study of fault slip seeks to redefine our understanding of how melt-bearing faults behave, say scientists at the University of Liverpool.

Geoscientists have used friction experiments to investigate the processes of fault slip.  Fault slip occurs in many natural environments – including during earthquakes – when large stress build-ups are rapidly released as two sliding tectonic plates grinds together.

In this process a large amount of the energy released can be converted to heat, that leads to frictional melting.  Frictional melts, when cooled, preserve in the rock-record as pseudotachylytes; but their influence is much greater than just this.

As Professor Lavallée and co-workers have demonstrated, the flow properties of the frictional melt helps control fault slip.

The researchers, from the University’s School of Environmental Sciences, warn of the inadequacy of simple Newtonian viscous analyses to describe molten rock along faults, and instead call for the more realistic application of viscoelastic theory.

Melt may be considered a liquid, which is able to undergo a glass transition, as a result of changing temperature and/ or strain-rate. This catastrophic transition allows the melt to either flow or fracture, according to the fault slip conditions.

Professor Lavallée said: “Even once frictional melt forms, slip can continue as if there was no melt; if the slip rate is fast enough the melt behaves as a solid.”

Using slip analysis models, the researchers describe the conditions that result in either viscous remobilisation or fracture of the melt, a description which will be of great use in the understanding of fault slip in melt-bearing slip zones.

Professor Lavallée added: “This new description of fault slip is not just important for our understanding of earthquake fault rheology, it has far reaching implications for magma transport in volcanic eruptions, for landslide and sector collapse instabilities, and within material sciences; namely for the glass and ceramic industries.”

The research, published in Proceedings of the National Academy of Sciences, was funded by the European Research Council (ERC) and involved the JAMSTEC Kochi Core Center, Japan and Ludwig Maximilian University of Munich, Germany.