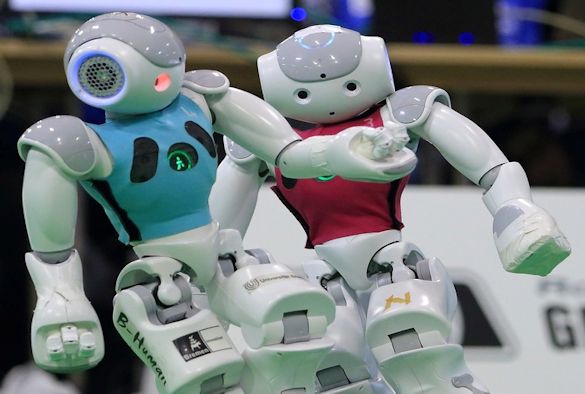 “Playing football probably isn’t the most obvious use for robots. Yet every year, scientists and engineers from all over the world gather to pit their robotic creations against each other in one of the most remarkable soccer competitions you could imagine.

Founded in 1997 and most recently hosted by China, the annual Robocup has grown into a Mecca for roboticists, attracting thousands of participants and tens of thousands of visitors every year. It comprises several leagues in which teams of and individual robots demonstrate their ball-handling skills. Or, more accurately, the hardware and software design skills of their creators.

The founding goal of RoboCup was to create a fully autonomous robot soccer team that could beat the winners of the human World Cup by 2050.

This raises three questions. Is this technically possible? How close are we to achieving this goal? And why on earth are scientists and engineers spending their time (and funding) on robotic football?

To answer the last question first, football demands many of the characteristics that make robotics and artificial intelligence (AI) in general challenging. It requires robots to work together and at the same time compete against other opponents.

It involves dealing with a large amount of uncertainty about the environment in terms of those other robots. It also places high demands on the technology robots use to interact with the world – their ears, eyes, hands and feet – and puts them in situations where their hardware can easily fail or even break.

Taken together, these factors pose huge technical challenges and so robotic football provides an appropriate, standardised problem for testing new scientific ideas and engineering principles. If we can tackle this, we will be able to deal with many other difficult problems such as coordinating autonomous vehicles in traffic, using robots in search-and-rescue missions and even in service and industrial settings.

In fact, Robocup now includes specialised leagues such as RoboCup@Home, which is about integrating robots in everyday life at home – for example, building a robot butler. More recently the competition has included RoboCup@Work, which is about developing the factory of the future in which robots and humans work side-by-side.

On the question of whether football-playing robots could ever beat the best human team in the world, it’s just worth pointing out that technology now moves incredibly fast. Sixty years ago, space travel seemed like an impossible dream. Today we are planning manned trips to Mars. Given this, I believe it is not unlikely we will be very close to achieving the original RoboCup goal by 2050.

So how are we doing? In the years since the competition’s creation we have seen a huge amount of progress. Matches in the simulation leagues (which are contested by software programs not physical robots) give the impression of watching a “real” game of football. And for several years you’ve been able to see great matches in the mid-sized wheeled robot league.

I’ve also seen great computer science progress in what used to be the Sony AIBO league (between robotic dogs) but has now been replaced by the Aldebaran NAO league between a standard set of miniature humanoids that each team programs separately.

But creating bespoke football-playing humanoid robots remains a great challenge because of the need to combine the mechanical hardware of a walking biped (which is very difficult compared to wheeled robotics) and the intelligence to support it.

Despite this, we have reached a stage where the competition has started tackling humanoid challenges in several leagues. And even though it remains a contest, what is truly beautiful about the robotic game is that the newly developed technologies and knowledge are openly shared by participants, boosting chances of success even further.”

This article first appeared in `The Conversation’.