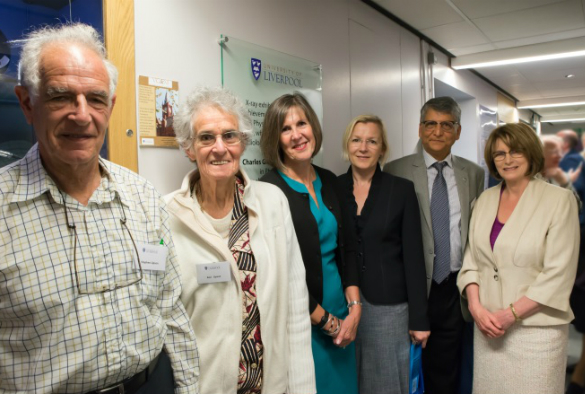 An X-ray exhibition celebrating the achievements of Sir Oliver Lodge, Charles Barkla, Arnold Beevers and Henry Lipson was opened at the University of Liverpool on 17 July 2015 by Vice-Chancellor Professor Janet Beer.

Sir Oliver Lodge was appointed first Professor of Physics at the University in 1881. He served the University for 19 years and demonstrated the first use of x-rays for surgery in 1896.

Charles Glover Barkla was a graduate and then a lecturer at the University. He made key contributions to the birth of X-ray physics and crystallography, for which he received the 1917 Nobel Prize in Physics.

Arnold Beevers and Henry Lipson, who were also students and staff at Liverpool in the 1930s, invented the Beevers-Lipson strip which became the workhorse of crystallographic calculations (Fourier synthesis) prior to the emergence of calculating machines and computers in the 1960s.

The exhibition was opened in the presence of a number of family members of Henry Lipson and coincides with the 100th anniversary of the Nobel Prize for Physics to Lawrence Bragg, who is regarded as the father of X-ray crystallography.

Professor Janet Beer on the occasion said: “The University has some of the outstanding groups in crystallography led by Professor Matt Rosseinsky and Professor Andy Cooper in the Department of Chemistry, and Max Perutz Professor Samar Hasnain and Dr Svetlana Antonyuk, co-directors of the Barkla X-ray Laboratory of Biophysics.

“We are proud of our heritage and are committed to be strong in this area in the coming decades.”

Visitors, students and staff are invited to visit this exhibition, which is located opposite the Barkla Laboratory on the first floor of the Life Science Building, between 08.30am – 5pm.