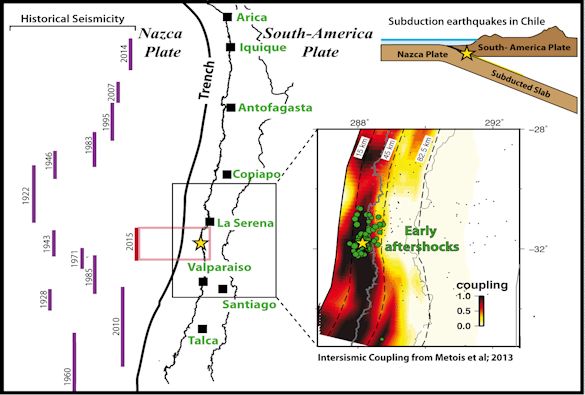 Dr Amaya Fuenzalida Velasco from the School of Environmental Sciences:

Here the Nazca tectonic plate is forced under the South-American continental plate at a convergence rate of 6.6cm/year.

This event also triggered a tsunami that reached heights of up to 4 meters in the Coquimbo bay area, north of the Capital Santiago, and damaged some of the ports in the littoral area of the Chilean coast.

A tsunami alert for the whole Pacific area was sent some minutes after the earthquake and more than a million people were evacuated from coastal areas of Chile.

Despite the fact that cities such as Illapel or Coquimbo were affected by strong shaking during the earthquake, the damage was moderate in comparison to other events of same size around the world.

That was in big part thanks to the deployment of important seismic networks that are recording and transmitting data in real time, allowing seismologists to give the alerts to the community very quickly.

This last important earthquake in this area occurred in the same zone in 1943, and broke with a magnitude 8.2 producing wide spread damage.

Geodetic studies show a region with a high coupling between the Nazca and South American tectonic plates (See Fig). That means that the surface between the plates was partially locked, and potentially has been for more than 70 years. This energy is then released in around only 70 seconds, the duration of the earthquake.

The Chilean subduction zone is a natural laboratory for the study of earthquakes because is one of the most actives places in the world, producing on average one earthquake of magnitude higher than 8 every ten years.

At the University of Liverpool we are working in close collaboration with the Chilean teams and expect that the long-term observations in this area will allow us to better understand the process of nucleation of the earthquakes and the mechanical behaviour that govern the subduction interface.”