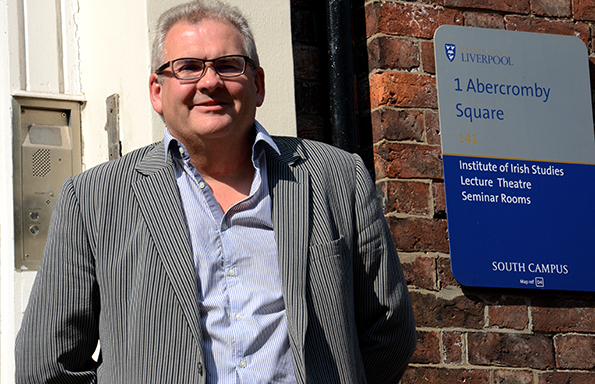 Professor Peter Shirlow has returned to the “wonderful city” of Liverpool as the new Blair Chair and Director of the Institute of Irish Studies.

Professor Shirlow, who completed his PhD in Geography at the University in the early 1990s, joins from Queen’s University, Belfast, where he was Deputy Director of the Institute for Conflict Transformation and Social Justice.

He said: “The first day here seemed like I had been away for five minutes! The character is still here but there is a sense of a city of the up.

“I’m also excited to see that the University has become much more global in terms of student intake.

“The demographics have changed since 1993, and Liverpool strikes me as a city and University that punches above its weight and achieves something greater than might be expected from a city of this size.

“Creativity and engagement make Liverpool what it is and it’s unique in the character of places in Britain and Ireland. It’s a wonderful city.”

Professor Shirlow brings a wealth of expertise to a role he says he has always been aware of, particularly its contribution to the increasingly friendly links between Ireland and Britain.

“The most important relationship for Britain and Ireland is the relationship with each other; in terms of trade, culture, the peace process and Northern Ireland”

Professor Shirlow said: “The most important relationship for Britain and Ireland is the relationship with each other; in terms of trade, culture, the peace process and Northern Ireland.

“This post offers the opportunity to maintain that linkage between the two places, so recently buoyed by the Queen’s visit and other developments.

“It’s an important role in terms of maintaining the quality of that relationship.”

Highly regarded for his expertise in Ireland, Professor Shirlow has undertaken consultations with political actors in Montenegro, Israel, Palestine, Turkey, Serbia, Macedonia and Bosnia, as well as travelling to Iraq on five occasions.

He has taken to the airwaves in the weeks since his arrival, following the publication of research examining changes to the Northern Ireland electorate in the wake of the 2015 General Election result. His most recent book, The End of Ulster Loyalism? was published in 2012.

In his new post, Professor Shirlow says he wants to “continue to develop people” and continue the Institute’s emphasis on “histories, literatures and politics”, whilst “finding a balance between the past and the present”.

But he also wants to explore the opportunities presented by the University’s London campus and “take the relevance we have here in Liverpool throughout Britain”.

He said: “One of the things we have to realise is the migration to Britain mostly of young, professional Irish people, particularly to London. It’s very important we engage with them to build the strongest relationship we can achieve.”

Professor Peter Shirlow takes up the role vacated by Professor Marianne Elliott, following her retirement in January this year. Professor Elliott remains an Honorary Research Professor in the Institute of Irish Studies.