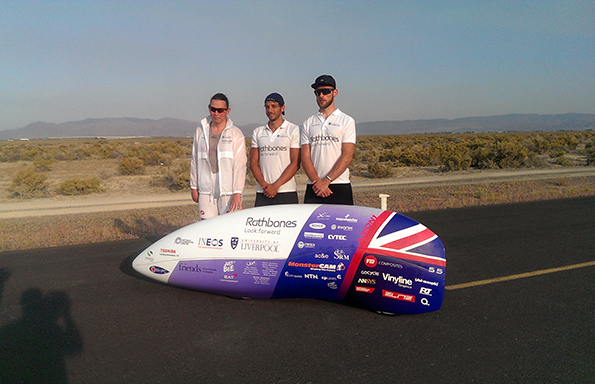 A team of students from the University of Liverpool broke the human powered British Land Speed Record three times whilst competing against an international field in Battle Mountain, Nevada.

The University of Liverpool Velocipede (ULV) Team designed and built their recumbent bicycle, ARION1, from scratch and, thanks to sponsorship from Rathbones Investment Management, were able to transport and race the finished product at the International Human Powered Vehicle Association’s (IHPVA) World Human Powered Speed Challenge 2015 held in the Nevada desert.

Aiming for the world record of 83.13mph, set at the same venue by a Dutch team in 2013, the team just fell short but were able to surpass the British record of 67.4mph, set by Rob English at Battle Mountain in 2002.

The male riders successfully qualified, but female rider, Natasha Morrison was unable to hit the speeds required to qualify for the main event. Mixed weather conditions then forced the abandonment of runs early in the week. But with the sun back out, the ULV Team clocked up a 69.7mph run by rider, Ken Buckley to take the British Land Speed Record.

On the final day, fellow rider, David Collins, a PhD student at the University, hit back with 70.6 MPH only for that speed to be topped by Ken pushing all the way to a new British Land Speed Record of 75.03mph.

Patrick Harper is the ULV Team Deputy Team Leader, he said: “It was a roller coaster week with highs and lows for the team.

“Damage sustained to the exterior shell and steering after a high speed impact meant working through the night on Thursday and Friday to make it possible for our riders to attempt breaking records again.

“On the final evening of the race week the bicycle was in great condition, the riders were pumped and the weather provided perfect racing conditions.

“David and Ken were able to hit incredible speeds – the team were ecstatic. “We would like to thank all our sponsors, without their support this wonderful project would not have been possible. The University of Liverpool now has the two fastest humans in the UK!”

The competition takes place on a regular road that is closed for just 20 minutes morning and evening each day. The riders accelerate over a five mile course, before reaching a 200m flat section where the speeds are measured and recorded. Both David and Ken were presented with commemorative speeding tickets by the Nevada sheriff for breaking the road’s 70mph speed limit.

Senior Lecturer in the School of Engineering, Dr Tim Short accompanied the team to Nevada. He said: “To break the British record three times in our first ever attempt at this challenge is an outstanding achievement for the whole ULV Team.

“The students have worked incredibly hard, with great enthusiasm through some very difficult circumstances. Both the School of Engineering and the University of Liverpool are extremely proud of what they’ve been able to accomplish.”

Rathbones Chief Operating Officer, Andrew Butcher said: “ARION1 is a triumph of British education, industry and sport. As investment managers, we seek to invest in future technology and it is therefore a privilege for us to help make possible the team’s success in smashing the British record.”

Although the ULV Team were unable to touch the 2013 world record on this occasion, it was topped by a Canadian team competing at the same event. Todd Reichert and his AeroVelo team achieved a speed of 86.65mph. With the design of ARION2 already underway this will be the target for the ULV Team at next year’s event.