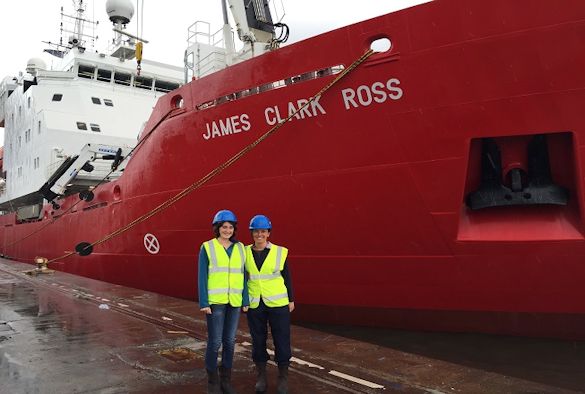 Postdoctoral researcher Robyn Tuerena and PhD student Charlotte Smith from the University of Liverpool’s School of Environmental Sciences have set off on  a research cruise aboard RRS James Clark Ross  to deploy scientific instruments and collect water samples over the mid-ocean ridge in the North and South Atlantic.

They are taking part in a long-running survey of the area of the Atlantic ocean known as the  Atlantic Meridional Transect, and the cruise between the UK and the Falkland Islands will take 55 days.

The scientific instruments will collect data continuously on the temperature, currents and nutrient concentrations over the ridge as a part of the NERC Ridgemix project.

Next summer, a research cruise run by the University with collaborators from the National Oceanography Centre and the Universities of Southampton and Bangor, will recover the instruments.

The aim of the project is to test the idea that mid-ocean ridges generate substantial amounts of turbulence which can mix deep ocean nutrients up towards the sea surface. These nutrients could be vital to support plankton growth in the global ocean.

Robyn and Charlotte are running a Blog whilst on their Atlantic voyage, which can be found at: https://anatlanticjourney.wordpress.com/.