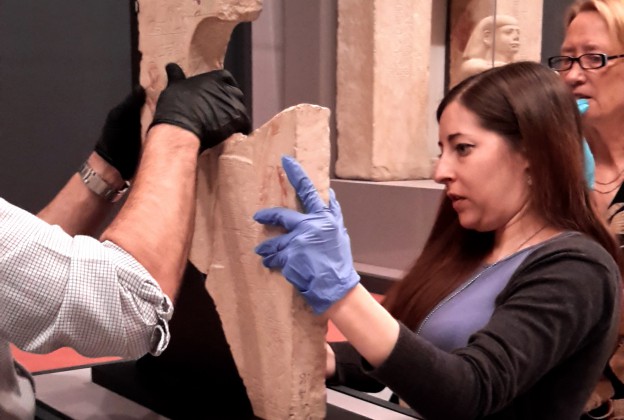 “I have just returned from the Metropolitan Museum of Art in New York, where we have been installing objects from the Garstang Museum of Archaeology for the Met’s Ancient Egypt Transformed: the Middle Kingdom exhibition. Objects from museums around the world dating to this period have been brought together for this exhibition, and we are delighted that two pieces from the Garstang Museum are among them.

Transporting ancient artefacts over long distances, and across international borders, is no simple matter. My first task was to assess and document the condition of the objects before they were packed for travel. These objects are irreplaceable, and we had to be confident that they were robust enough to travel before allowing them to leave.

Once documented, packed, and loaded into the van, I accompanied the objects for the journey to New York. This involved a lot of standing around in drafty aircraft warehouses with fellow curators from other UK museums, watching as the crates were x-rayed and (carefully!) stowed in shipping containers. Once the containers were loaded onto the aircraft we were able to board. At the other end of the flight the process was done again in reverse, and the crates containing the artefacts were accompanied all the way into the storerooms of the Metropolitan Museum.

The crates were left in the Museum overnight to allow the objects to acclimatise to their new environmental conditions. The next day they were unpacked, and conservators from the Met and I carefully compared the artefacts to the condition reports prepared before the journey, to make sure no damage had occurred in transit. Over the next few days we installed the objects in the galleries which will be their home for the next four months. One of our objects, a wooden statuette of a female dwarf holding her baby, required a new mount made to allow her to stand upright. Our ‘ankh stela’, an inscribed and painted stone object, with the symbol representing the word ‘life’ cut out from the centre, took time and skill to be re-seated on its original mount.”

To find out more about the ‘Ancient Egypt Transformed: the Middle Kingdom’ exhibition, visit: http://www.metmuseum.org/about-the-museum/press-room/exhibitions/2015/middle-kingdom