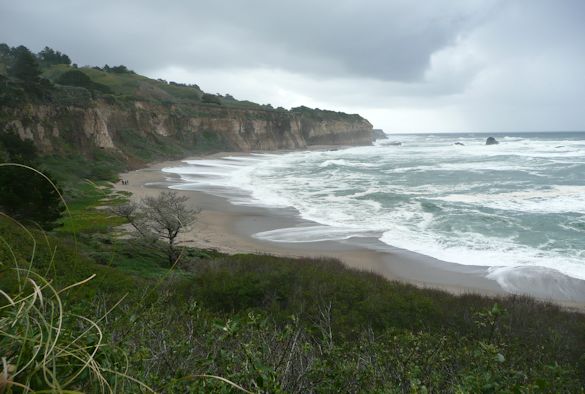 Professor Andy Plater, from the Department of Geography & Planning, considers how as the clocks turn back, beaches change their role and become the frontline defence against winter storms:

“As British summer ends our beaches shift from a place of recreation to a defence zone against winter storms. Over the summer beaches naturally build up, and in some places are artificially nourished during the tourist season.

This increased level of sand makes our coastline less vulnerable to storms, with a bigger beach acting as a natural shock absorber, sitting between us and the energy of stormy seas.

The Dutch have taken an ambitious approach to reduce coastal flood and erosion risk by building out the beach towards the sea. The scheme is caller the Zandmotor (Sand Engine) and aims to prevent the need for beach nourishment until 2032.

It was built between March and November 2011 and continues to feed the nearby coast following the initial winter seasons. Rising sea levels and expanding coastal population and industry means our beaches are becoming ‘squeezed’.

So would a sandy-gravel engine work in the UK? Supporting habitat and recreation, while also providing an alternative to the concrete defence we are so used to seeing.

The University of Liverpool together with the National Oceanography Centre (NOC), British Geological Survey, Crown Estate and the Environment Agency have delivered the first UK pilot study to identify computer models to assess if such a scheme would be possible in the UK.

These models simulate coastal conditions to identify how sediment within a built up beach area could be naturally redistributed by waves and currents to support areas of coastline vulnerable to erosion.

We have successfully set up models to simulate the possible evolution of a variety of advance line options over a 100 year period along the Dungeness shoreline in Kent.

Our aim is to develop this model with more sophisticated gravel transport equations for coastal authorities and consultancies to use anywhere, so they can assess the changing vulnerability of existing naturally occurring coastal defence barriers and potential sites for advancing the line in future defence schemes.”

To take this research further, the University and NOC have partnered with Plymouth University, the Ceredigion Bay coastal group and Royal Haskoning DHV to offer a NERC PhD studentship within the Manchester & Liverpool Doctoral Training Programme.

Further details about this PhD opportunity can be found here >>>>.