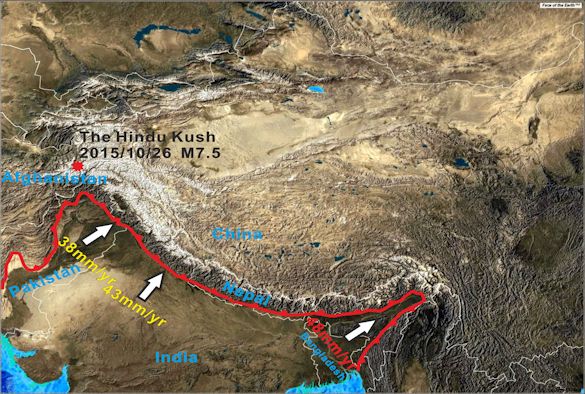 Dr Thomas Garth and Lidong Bie are members of Professor Andreas Rietbrock’s research group in the Department of Earth, Ocean and Ecological Sciences:

Global earthquake monitoring systems are well established, and within minutes the world has a reasonably accurate view of the location and magnitude of the earthquake, and even some estimations of the type of fault that caused the earthquake.

As reported by the US Geological Survey (USGS), the earthquake ruptured a thrust fault at a depth of about 220 km. What we really want to know though is what the effect of the earthquake will be on the people who live there, and here things become less clear.

Many large earthquakes occur and are hardly noted by anyone but scientists, and equally much smaller earthquakes are able to cause widespread damage.

So what are the factors that will affect people in this earthquake?

Firstly we consider the energy released by the earthquake. It has a moment magnitude of 7.5, so released about a third of the energy compared to the recent M7.8 Nepal earthquake; however, for a continental earthquake this is still extremely powerful.

Secondly we consider the depth of the earthquake. With an approximate depth of 220 km this earthquake is much deeper than recent devastating earthquakes such as the Nepal earthquake. This means that the maximum shaking seen is likely to be less than an equivalent shallower earthquake, but also means that shaking from the earthquake will be felt in a much wider region.

Thirdly we consider the area the earthquake occurred in. The combination of mountainous terrain and thick sediments in the valley may have been conducive to landsides, and strong ground amplification.

All these factors together with a relatively unprepared infrastructure in the source area could mean that this earthquake has a significant human impact.

This however is not an area where earthquakes are unexpected. The USGS reports at least seven other large earthquakes with magnitude greater than 7 occurred in the last century, within 250 km of this one. Northern Afghanistan sits on the western edge of the Himalayas, the highest mountain range on Earth, which formed as the Indian plate collided with the Eurasian plate.

This collision continues as the Indian plate is forced beneath the Eurasian plate at a rate of approximately 38 mm/yr.

This earthquake is also notable because it occurred at such great depth. In most areas of the earth we do not expect earthquakes to occur below about 40 km depth. Deeper than this the crust is at very high temperatures and pressures, so deforms in a ductile fashion (like stretching blue-tack).

In the Himalayan collision zone though the crust is much thicker, meaning that the brittle deformation seen in earthquakes might occur to depths of 80 – 90 km. Why earthquakes in the Hindu Kush region occur at depths as great as 220 km remains an open question.

It is conceivable that the processes involved are similar to those occurring in active subduction zones like the Andes; however, the material properties and driving mechanisms at these depths are still poorly understood and an active area of seismological research.”