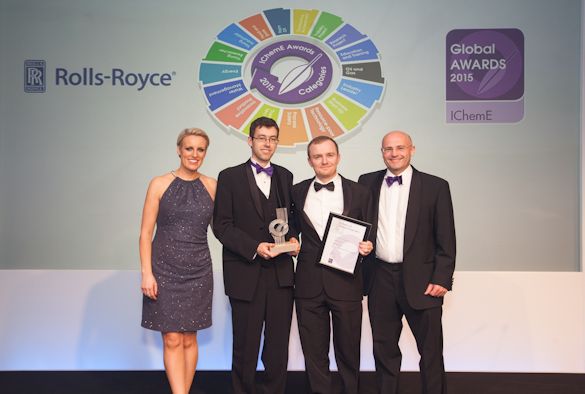 A team of physicists from the University’s Stephenson Institute for Renewable Energy (SIRE) have won the prestigious Institute of Chemical Engineers (IChemE) Global award for Energy for their project ‘Safer and Cheaper Solar Cell Processing’.

The method, published in Nature last year, replaces an expensive toxic chemical with a safe one – which turns out to be the principal ingredient of bath salts. It attracted widespread media attention when it was published.

The team received the award at a high-profile ceremony held in Birmingham which attracted nominees from academia and industry from all the world over.

Dr Jon Major , Research Fellow with SIRE, said: “We are pleased to win this award as it reflects the work in SIRE to enable new forms of power generation. This award highlights the increasingly cross-disciplinary nature of our work”.

Dr Laurie Phillips, Research Associate, said:  “It is very pleasing to get recognition from outside our own research field and to have had an impact on another discipline’

Dr Rob Treharne, who was the first to think of the new process, said: ‘It was very productive to work with a group of like-minded individuals to test a new idea in the lab and to turn it into a real practical solution for solar cell manufacture.”

Professor Ken Durose , Director of SIRE, added: “It is really special to have a paper in Nature and then have it recognised for its impact. As a physics based team its amazing to have won an award in Chemical Engineering, and we’re very pleased that the new process is seen important in real practice.”

The University’s Stephenson Institute for Renewable Energy is an interdisciplinary research centre dedicated to renewable and sustainable energy sources.