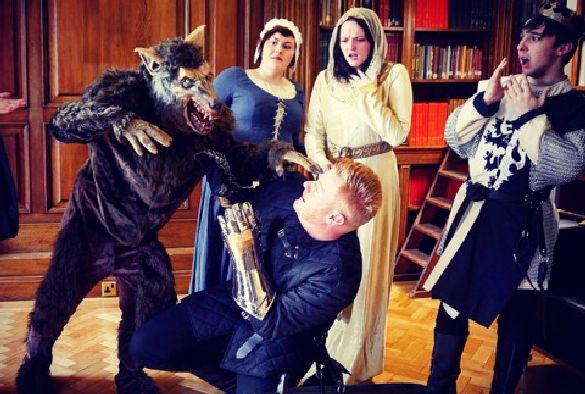 Some of the costumes featured in 'The Werewolf.'

Dr Rebecca Dixon, from the University’s Department of Modern Languages and Cultures, is working with Professor Sarah Peverley in the Department of English on a workshop in medieval fashion for school pupils as part of the city’s Being Human Festival.

She is also working with Professor Peverley and the Liverpool University Players, on the production of the 12th century story, ‘The Werewolf.’

She talks here to School of the Arts student, Ella Poyzer, about the importance of clothing and costume in both the Middle Ages and modern day.

1. One of your research areas is the history of dress. How important do you think ‘costume’ will be in addressing the key themes of the ‘Being Human’ festival?

“The two things that set humans apart from animals are speech and the desire – after the Fall – to clothe our bodies not just for warmth and protection, but also to cover ‘shameful’ nakedness. Beyond this, the choices we make in selecting the garments with which we wish to costume ourselves indicates the way that we perceive ourselves, our role in the world, and the image of this which we’d like to project to others. Costume is essential to what it means to be human, and to our notions of how and why this matters.”

2. We often romanticise the fashions of the medieval period; Is it difficult for modern audiences to truly understand the significance clothing held at that time?

“As far as the medieval period is concerned, the ‘past is a different country’, where things were done differently and where social practices were very much behind what we consider to be the norm nowadays.

“The rise in popularity of series like Merlin and to a much greater extent Game of Thrones – which does a pretty good job of giving a fairly accurate yet highly stylized image of medieval clothing – is going some way to changing this perception and is allowing modern audiences a more privileged and entertaining window into the past.”

“Dressing is all about identity, self-projection – putting on clothes in the morning is a far less innocent practice than merely a way of covering up. Even that person who tells you that they have no interest in fashion and just wears what they want is making a decision about the image which they want to present via their clothes and outward appearance.

“Things were no different in the Middle Ages: the élite classes set the trends, using clothing to indicate status, wealth, and power; and the classes below them sought to emulate these practices to show that they knew what ‘the done thing’ was. It’s all about sending out signals about yourself as an individual within a collective when you decide what to wear.”

4. Considering that Bisclavret’s clothing is the only thing that is able to restore him back from a werewolf to human form, how important do you believe clothes and costumes to be in Marie De France’s work in particular?

“Clothes and costumes – and also the materials used to make them – are highly and often subtly important in the work of Marie de France. Just as in Bisclavret where, as you say, clothing restores the werewolf to his human state, so too in other works do clothes work to ‘weave’ the lais, to structure their narrative thread.

“Marie uses clothing especially skilfully in her works: she understands its importance not only as a sort of social glue but also sees and expresses with subtlety the metaphorical, semiotic significance which can be attached to garments. Again, this is not so very different from the modern importance of clothing – it transforms who we are, and gives us our own narrative.”

5. Finally, where would you advise students who are interested in studying the importance of medieval clothing to begin their research?

“I’d say that there are few better places to start than in the work of Margaret Scott, especially Late Gothic Europe or her book on fashion in manuscripts held in the British Library. Margaret – who taught me on my History of Dress MA at the Courtauld – is rather rare in her willingness to engage with both literary and visual sources, and communicates her enthusiasm for the subject in her writings so infectiously.

“Otherwise, I’d recommend going to museums like the National Gallery in London or our fabulous Walker here in Liverpool and just wandering round and looking, observing the care and attention with which artists depicted the clothed body, and getting a feel for the types of things which were worn and when. Be warned, though – once you start it’s very very hard to stop!”