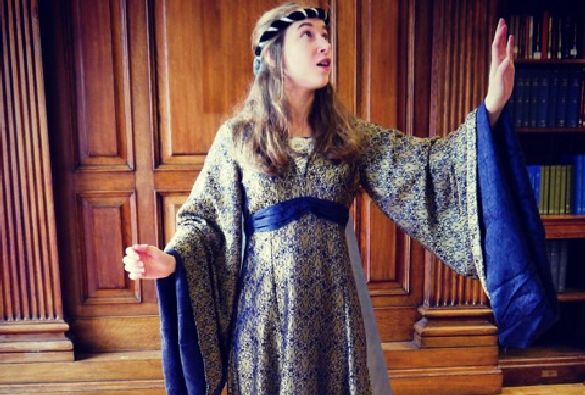 Madelaine Smart, a School of the Arts PhD student, is the leading lady in the Liverpool University Players’ production, ‘The Werewolf’, as part of the Being Human Festival.

She talks here to fellow School of the Arts student, Ella Poyzer, about her role within the play and how being part of the Players has helped her to enhance her career.

1. Is there anything you feel that a modern audience could learn from this play?

“I think a modern audience could learn that these medieval texts are not as daunting as perhaps they may at first appear. I am a strong believer that Medieval and Shakespearean texts would be made more accessible by just telling the stories.

“So many children are put off by the thought of early literature because they do not understand the language. By introducing them to these stories at a younger age they become more familiarised with the characters, so that when it comes to studying the language they already feel at ease with it.”

2. What does Bisclavret reveal about the medieval perception of what it means to ‘be human’?

“It explores timeless human emotions such as love, loyalty and betrayal. It highlights that for centuries people have been fascinated by the dichotomy of the noble moral side of man and the beastly animal side. This is presented on stage, but with the twist being that the beast is not who you necessarily expect it to be.”

3. Is there anything you have found challenging about your role so far?

“Learning the lines! It is always a bit daunting, even when you have been doing it for years. I took part in one of the Arts and Humanities Research Centre (AHRC) storytelling programmes in Oxford in 2014, so I suppose you could say I am a trained storyteller of some sorts. The project helped promote and assist the telling of stories to children for events like the Being Human Festival.”

4. Bisclavret deals with themes of betrayal, yet at the same time there are a number of comedic elements. Is it more satisfying to make an audience laugh or cry?

“A mixture of both. The beauty of theatre, especially a play like this, is that it takes the audience on a journey. You cannot have one without the other. Tragedy makes the comedy sweeter.”