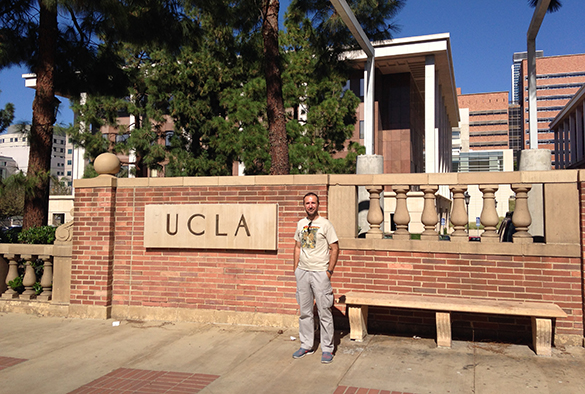 Dr Yannis Tzioumakis, from the University’s Department of Communication and Media, visited Los Angeles to conduct research at UCLA’s Film and Television Archive and at the Fairbanks Center for Motion Picture Study in Beverly Hills for his two current book projects: a history of acting in American independent cinema and an examination of the origins of youth culture in the 1956 film Rock around the Clock.

“American independent cinema has been perceived traditionally by critics as a writer/director’s medium (think of Quentin Tarantino, Wes Anderson, Jim Jarmusch etc), which means that the work of actors as performers but also as agents who help finance, produce and market independent films is often obscured.

And yet when we think of key independent films we always think of particular performers, whose craftsmanship and talent do not just translate a filmmaker’s vision on the screen but often help define it. For instance, an actor such as Bill Murray has contributed greatly to the distinct aesthetics that characterise films by Wes Anderson, Sofia Coppola and Jim Jarmusch, while the participation of a star of Murray’s calibre in films such as Life Aquatic with Steve Zissou, Lost in Translation and Broken Flowers certainly helped these films receive finance and be marketed to wide audience demographics.

And the same can be said about an actress such as Julianne Moore who has contributed a range of performances from the understated to the excessive in films by Todd Haynes, Paul Thomas Anderson and the Coen brothers.

At UCLA’s Film and Television Archive, I researched the so-called ‘LA Rebellion,’ a group of low-budget films created by African American filmmakers associated with UCLA’s Film School in the late 1970s and early 1980s to tell stories about the disenfranchised and oppressed black population in and around Los Angeles that was ignored till that time by mainstream media. Films such as Bush Mama, Killer of Sheep and Bless their Little Hearts are not only showcases for their talented makers but also for the actors in them, many of which had no professional training and therefore imbued the films they appeared with an immediacy and raw energy that is not easy to find in other independent films of the period.

At the Fairbanks Center for Motion Picture Study, the foremost research library for the study of film in the United States, I continued my research on actors and independent film, paying particular attention to actors who have also acted as film producers. In the Center’s files I located information about the production companies actors have established in order to have more control of the films they appear in, as well as the ways they have helped finance films through their marquee value by attracting external investors. For instance, the classic film Reservoir Dogs would not have been made had actor Harvey Keitel not invested his own money in the picture and had not become one of the film’s producers.

My research at the Fairbanks Center for Motion Picture Study also focused on finding information on the first ever film to exploit the rock’n’roll craze in the 1950s. Based on the titular song by Bill Haley and His Comets, Rock around the Clock (1956) was a clear example of exploitation filmmaking, at the time when the song was enjoying remarkable success in the charts, providing free publicity to the filmmakers. But despite being a “clean teenpic” the film caused a lot of controversy when it was released – especially in the UK – as it reportedly caused young people to perform acts of juvenile delinquency.

I collected a lot of archival material from the time of the film’s release in order to tell this story and explore in more detail the reasons behind the association of youth culture with delinquency and unruly behaviour.

More
Viewpoint: Victory for ‘indiewood’ at the Oscars?