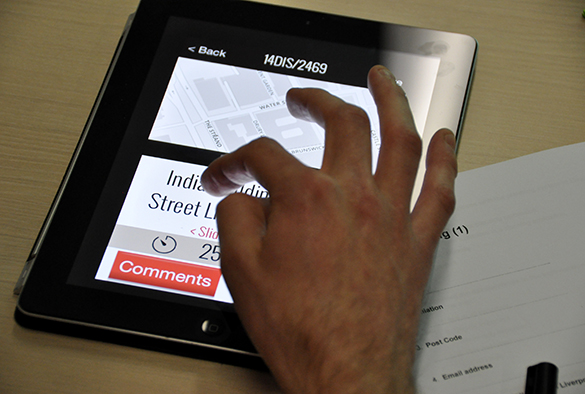 A new app that could improve public engagement with the urban planning process has been chosen as a best practice project by the All-Party Parliamentary Design and Innovation Group.

Professor Richard Koeck, from the University of Liverpool’s Centre for Architecture and the Visual Arts (CAVA), part of the University’s School of Architecture, will present Open Planning: Rethinking the Urban Planning Process in the Digital Space at the House of Commons on Tuesday 24 November.

The app, developed by Professor Koeck alongside partners in both the public and private sector, allows users instant access to the latest planning updates in a specified area, whether commercial or domestic.

Professor Koeck said: “It’s most likely that the app would be issued by the local authority, in our case Liverpool City Council, and downloaded from an app store. As you walk through the city you would get notifications about any planning applications ongoing in that area.

“You would then be provided with clear information and a link to the local authority’s planning portal, where all the information about the planning application is already held.

“At the moment, you are relying on an on-street notification – something attached to a lamp-post for example – and the chances are that a lot of people are missing out on this information. “The advantage of this new approach is that you can pin point an area, say a radius around your home, and if a planning application comes up, whether commercial or domestic, you would be notified and be able to comment.

“It’s a fantastic way to keep informed about what is going on around you in terms of planning, without having to go and find out yourself.”

The app can also provide the same information using visual media or audio, an additional level of functionality that could be of particular use to the visually or hearing impaired.

A working prototype has been developed following consultation with Liverpool City Council and community groups, and Professor Koeck now hopes to roll out a pilot scheme to test the system and ensure it is “transparent and robust”.

In the four years since The Creative Exchange was formed, 120 researchers in the arts and humanities have been united with 180 partners in industry, publicly-funded bodies and community groups to research and prototype innovative new products and experiences related to the emergence of a digital public space in the UK.

Professor Richard Koeck will appear before the All- Party Parliamentary Design and Innovation Group, alongside Creative Exchange partners, in the House of Commons’ Churchill Room between 4-6pm on Tuesday November 24.