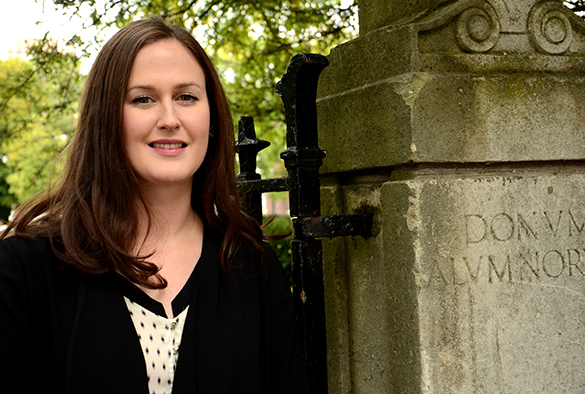 Grace Gaynor is a PhD candidate in the University of Liverpool’s Department of English. Alongside her PhD, Grace works as a Postgraduate Research Administrator for the University’s Faculty of Humanities and Social Sciences.

“So the Platonic Year
Whirls out new right and wrong,
Whirls in the old instead;
All men are dancers and their tread
Goes to the barbarous clangour of a gong.

These are the lines from WB Yeats’s poem ‘Nineteen Hundred and Nineteen’ that the Argentine writer Jorge Luis Borges (1899 – 1986) used as an epigraph to his short story ‘Theme of the Traitor and the Hero’, originally published in 1944. It is the first of two epigraphs that Borges takes from Yeats’s poetry, and considering the number of other instances in which Borges refers to Yeats in his work and in articles or interviews, his connection to Yeats remains relatively unexplored.

My research not only focuses on instances in which Borges makes explicit or implicit reference to Yeats, but where Borges tends to situate these references. He frequently mentions Yeats in contexts relating to geometric imagery, for example, the epigraph from ‘Nineteen Hundred and Nineteen’ evokes the image of Yeats’s ‘gyres’. These ‘gyres’, which are particularly identifiable in Yeats’s poem ‘The Second Coming’, are three dimensional spirals that get progressively wider. They are the foundation of Yeats’s work A Vision, which sets out to describe the cycles and movements of history and time.

”This year marks the 150th anniversary of the birth of W. B. Yeats, and it has certainly been a wonderful year to be researching him. Studying Yeats alongside an Argentine writer has also given me a sense of Yeats’s perpetual international appeal, and not only amongst writers”

This epigraph sets up the story, which explores the concepts of time and history inherent in Yeats’s ‘gyres’, particularly through the labyrinthine structure of the story. Borges’s work is synonymous with structure of the labyrinth, and he frequently explores other geometric and mathematical constructs of time, history and memory in his work, for example the mysterious library in his short story ‘The Library of Babel’, which is ‘infinitely hexagonal’.

I am also focusing on another context in which Borges frequently refers to Yeats, which is when discussing ideas surrounding memory and specifically the ‘Great Memory’, which is an inherited memory shared by all humans. Borges once said of Yeats that he possessed “The memory that would inherit everything…almost infinitely in geometric progression”, which highlights the connection Borges made between Yeats, memory and geometry.

This year marks the 150th anniversary of the birth of W. B. Yeats, and it has certainly been a wonderful year to be researching him. The number of events, lectures and newspaper articles surrounding this celebration has given me plenty of exciting opportunities to develop my research. Studying Yeats alongside an Argentine writer has also given me a sense of Yeats’s perpetual international appeal, and not only amongst writers. My attendance at the Yeats International Summer School in Sligo for the past two years has highlighted the unwavering appreciation of Yeats amongst the students and academics, who had come from all over the world to attend the school. There are also Yeats Societies springing up across the globe, and I recently gave a paper on Yeats and Borges at the Hungarian Yeats Society’s inaugural conference in Budapest.

I expect that my research will change and develop substantially over the coming years, and I hope to continue to make the most of the wonderful and unique opportunities that doing a PhD offers.”