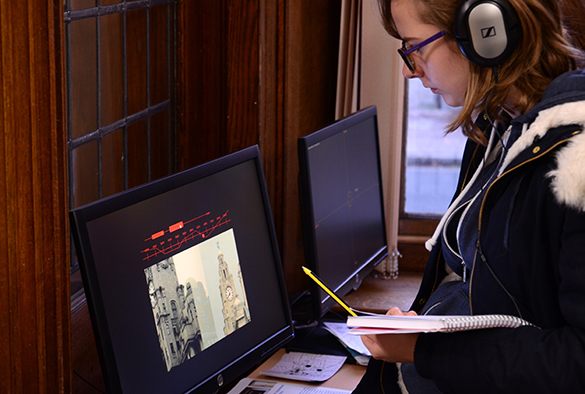 As part of the national Being Human 2015 festival, numerous researchers from around the University have been organising poster displays, events, and activities on the theme of ‘being human’, from explorations of cyborgs to performances of medieval plays, from time-elapse recordings of plants responding to people and their environment to discussions of gait, language, and art (for more, see www.liv.ac.uk/being-human).

The activities of the festival are intended to start a conversation about what ‘being human’ means, across various disciplines. Being human is not the same, after all, as being homo sapiens. There are obvious cultural distinctions to be made about ways of ‘being human’ historically, including who and what is considered to be ‘human’, but other factors are also involved. Being human anthropologically is different to being human biologically or legally, and we’re interested in exploring what those differences are. What concerns us in this short piece, however, is being human linguistically.

It used to be assumed that language is one of the things that differentiates humans from other animals. Although it is becoming increasingly recognised that other animals also communicate, and have something approximating their own languages, it is still a broadly assumed fact that language serves to define ‘being human’. But what about the different languages we speak, as humans; what do they reveal about us? Gestural languages, such as British or American Sign Language, tend towards describing the individual, or referencing the person communicating (what does it mean for an ape or chimpanzee to sign this, then?). Verbal and written languages offer a further plethora of other signs and marks to indicate ‘human’ and ‘human-ness’, some quite closely affiliated, some quite distinct, and being involved in issues of age, status, gender, religion, characteristics, species, and tribe.

The festival organisers chose the title of ‘Being Human’ for a festival of the humanities for obvious reasons; humanities subjects obviously deal with the subject of the ‘human’, and the phrase is suitably inclusive of other disciplines and practices. What the phrase actually means and the resonances it possesses, however, even in English, are slightly more involved; it is not quite an idiomatic phrase, but it’s equally not an everyday phrase, suggesting something like ‘existing as a human’ or ‘what it means to be human’.

To examine this in a bit more detail, etymologically in English ‘human’ (which works as an adjective or a noun, a grammatical dualism / ambivalence that can’t always be replicated in other languages.) something between animal and god (or an individual that is neither animal nor a god), one of the people who are, as the Oxford English Dictionary suggests through the Latinate root, humanus, ‘civilised, kindly, considerate’—which would presumably be opposed to barbarus [barbarian]. This distinguishes between different types of humans through the languages they (didn’t) speak and how they were perceived to act. But in English, ‘human’ and its associated terms ‘mankind’ and ‘humanity’, are thus rooted in a sense of being civilised rather than savage, suggesting a social creature who engages with others.

If that’s English, albeit in brief, what about other languages? We’re going to offer some tasters for you, exploring some of the cultural, historical, and conceptual differences in the senses of ‘being human’. But what we really want to do is to ‘crowd-source’ the linguistics. Basically, in up to 250 words we want you to tell us how you would translate ‘being human’ into a language you know, alongside what resonances it has and assumptions it contains, and then post it to the University of Liverpool’s ‘Being Human’ Facebook page. Linguistic examples can be gestural, verbal, or written; extinct, endangered, or living; ancient or modern; dialect or official; artificial or natural—it all goes towards examining how humans use language to define themselves, whether Proto-Indo-European, Maori, Latin, Coptic, Esperanto, Elvish, or Klingon.

‘Being Human’ in Welsh (Will Slocombe, with the assistance of T. Robin Chapman)

Google Translate (correctly) translates ‘being human’ as ‘bod yn ddynol’ and ‘human being’ as ‘bod dynol’. Bing doesn’t recognise the distinction between the two, (incorrectly) suggesting ‘bod dynol’ for both. ‘Human’ in Welsh is actually ‘dynol’, but it operates primarily as an adjective rather than as a noun, which means that you cannot be a human in Welsh, so much as possess characteristics that are human: ‘bod dynol’ means ‘a being that is human’. The apparent confusion arises from ‘bod’ being both a verb (to be) and a noun (a being). ‘Bod yn ddynol’, or being human, is thus the present participle of ‘to be’—indicated by ‘yn’ here—and a sense of human-ness.  Further terms to consider are ‘humanity’ (‘dynoliaeth’) and ‘mankind’ (‘dynolryw’ or ‘dynol ryw’), and you’ll notice the same root, ‘dyn’, in each of these terms.  ‘Dyn’ means ‘man’ or ‘person’, or the impersonal third person conveyed by ‘one’ in English and ‘on’ in French.  In Welsh, then, ‘human’ is gendered, as is the case with a number of languages.

‘Being Human’ in German (Lyn Marven)

Although German is closely related to English, the German translation of ‘being human’, ‘Mensch sein’ or ‘menschlich sein’ or even ‘Menschsein’, looks less familiar to an English speaker than the equivalent phrases in the Romance languages: the German noun ‘Mensch’ (person, individual, human being) and the adjective ‘menschlich’, are derived from the common root of man/Mann. English is in fact alone among the West Germanic languages in adopting the Latinate form for ‘human’: Dutch (mens; menselijk) as well as Frisian (minsk; minsklik) also remain resolutely Germanic in etymology. But back to those alternative translations: ‘Mensch sein’ (c. 485,000 Google hits) is to be a human (being), whereas ‘menschlich sein’ (c. 34,800 hits) is to be human-like – and also the title of the German-language WikiHow page on how to be (like a) human, a set of instructions as if for an alien on how to act human. There is substantial overlap between the two phrases, which are used almost interchangeably, but menschlich also has the senses of being humane and also of being fallible: being ‘only human’. German doesn’t do gerunds like ‘being’, but it does do compound nouns, and the third option for translating the phrase, ‘Menschsein’ (c. 446,000 hits) is an infinitival noun which denotes the state of being human, or human-ness. Which one of these would be the most appropriate translation in any given sentence is probably something that only a human, with a sense of nuance, context and history, can decide.

‘Being Human’ in Spanish (Claire Taylor)

‘Being Human’ in Spanish (and also Portuguese) translates rather neatly – or so it seems at first sight – into ‘ser humano’. The phrase is composed of the verb ‘ser’ – ‘to be’ – and the adjective ‘humano’ – ‘human’. One thing that makes this slightly more complicated is that Spanish has two verbs for ‘to be’, these being ‘ser’ and ‘estar’, with the former, broadly speaking, being used to indicate permanent states of being, and the latter being used to indicate more temporary states: so, to give an example, I will always ser inglesa (be English), but I am only at times estar enojada (be angry). So far, so good. But what we’ve actually got in our conjunction of ‘ser’ + ‘humano’ is in fact an ambiguous phrase because ‘ser humano’ (verb + adjective) is also in fact a noun+ adjective. ‘Un ser humano’ means ‘a human being’.

So what we’ve lost in the Spanish is the inversion of the syntax in the English (‘human being’ à ‘being human’); in the Spanish, the syntax for both is the same. We do, though, still have the play on words ‘human’ and ‘humanities’ (‘humano’ and ‘humanidades’ in Spanish having the same root). But perhaps what might be more interesting is if we go back to the ‘ser/estar’ distinction. Could we ever say, for example, ‘estar humano’ for when a machine, or a machine-human hybrid, temporarily takes on human characteristics?

More
Being Human: Dr Will Slocombe talks Man Vs Machine