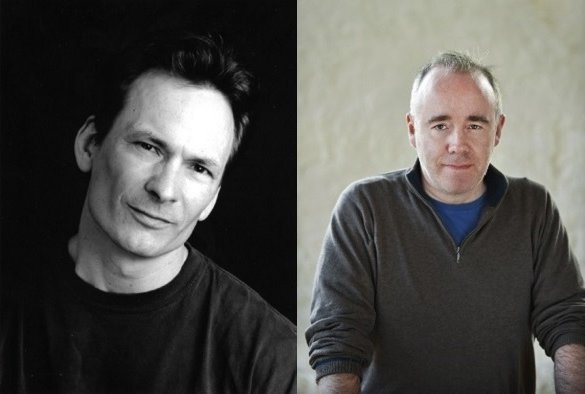 Poet, essayist, novelist, critic, and translator Forrest Gander is a United States Artists Rockefeller Fellow and the recipient of fellowships from the Library of Congress, the National Endowment for the Arts, the John Simon Guggenheim Foundation, The Whiting Foundation, and the Howard Foundation.

Born in the Mojave Desert, he grew up in Virginia and travelled intensively; he has degrees in geology, a subject referenced frequently in both his poems and essays, and in English literature.

Currently, he is the Adele Kellenberg Seaver Professor of Literary Arts and Comparative Literatures at Brown University in Rhode Island.

John Redmond was born in Dublin in 1967. After completing a PhD in contemporary poetry at Oxford, he taught for two years at Macalester College in Minnesota.

Currently he is Reader in English and Creative Writing at the University of Liverpool. He reviews poetry widely and was associated with the poetry magazine, Thumbscrew. He has published a textbook How to Write a Poem (Oxford: Blackwell) and was the editor of James Liddy: Selected Poems (Dublin: Arlen House).

His critical book Poetry and Privacy: Questioning Public Interpretations of Contemporary British and Irish Poetry was published by Seren and was one of the Guardian’s best poetry books of 2013.

Forrest Gander and John Redmond appear at the School of Arts Library on Tuesday 24 October from 5.15pm. The event is free to attend, but booking is recommended. To book your place, please visit: http://www.eventbrite.co.uk/e/miriam-allott-visiting-writers-series-2015-forrest-gander-and-john-redmond-tickets-18186582558