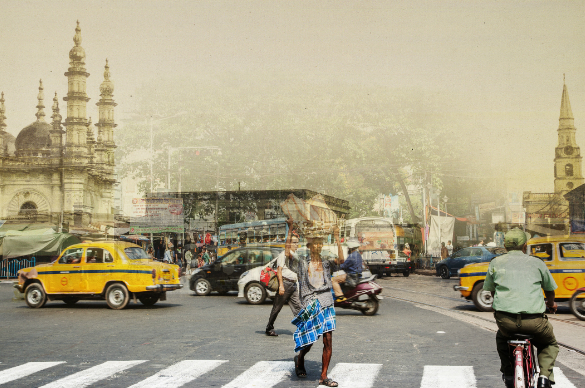 ‘Encounters’ is the first in an online and social media series focusing on the University’s work in India. Here we look at research in the Department of English and the School of Architecture on ‘Envisioning the Indian City.’

Researchers at the University of Liverpool, in partnership with the British Library and Jadavpur University, have launched a mobile app that embeds historic images of Kolkata in an interactive map.

Launched at Victoria Memorial Hall, Kolkata, the app incorporates more than 100 geographical points and historic images of the city, dipping into the past as well as depicting the landscape today.

Many of the images used in the app are held in the British Library’s extensive photographic archives and date back to the 1800s. Alongside film and sounds of the city, it creates an ‘augmented reality’, that allows the user to imagine themselves in the environment.

Professor Nandini Das, Project lead from the University of Liverpool’s Department of English: “We hope that this new app will allow users to experience the urban space in a fresh and exciting way. It will showcase the city in a way that brings history to life and demonstrates how significant people, spaces, sounds and images are in the development of any urban area.

“The team, which includes Professor Supriya Chaudhuri from Jadavpur University, are looking forward to watching the app develop and continuing our work with the British Library in opening its collection further across Kolkata and cities beyond.”

John Falconer, Lead Curator of Prints, Drawings and Photographs at the British Library, said: “The richness of Kolkata historical remains, often half-hidden behind the façade of an expanding modern city, is reflected in the rich archive of images in the British Library’s collections, which chart the growth of the city, particularly in the photographic age from the mid-19th century onwards.

“The use of this material in the development of this app brings past and present dramatically together and brings history to life in an immersive and absorbing way. It’s exciting to see the Library’s collections being harnessed to digital technology in ways which will allow new audiences to engage with this material creatively.”

The app development follows a wider research project called ‘Envisioning the Indian City’ (ETIC). Led by researchers at Liverpool and Jadavpur across multiple disciplines, the project, supported by the UK-India Education and Research Initiative (UKIERI), aims to explore the critical role played by Indian cities in negotiating contact between India and the rest of the world.

Researchers are asking questions, such as: how does the city function as the focus of cross-cultural exchange in colonial and post-colonial India; what is the nature of the marks left on the identities of the cities as a result of such exchanges; and in what ways have they shaped the urban space across geographical regions and throughout history?

Following the launch of the app, called ‘Timescape Kolkata’, the team will also be announcing a podcast series, called Realise: Encounters with India, and a book of the research, due to be published in 2016.

The app is available to download from Saturday, 28 November.