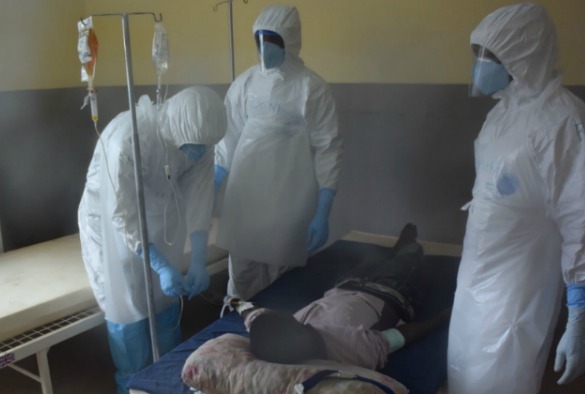 The Ebola-Tx trial, led by the Antwerp Institute of Tropical Medicine (ITM), evaluated the effectiveness of convalescent plasma (CP) therapy. Ebola patients in Guinea were giving a transfusion of plasma donated by survivors of the disease.

Plasma is the liquid part of blood that in survivors contains antibodies against the Ebola virus. It was thought this would boost the immune system of Ebola patients and improve their chance of survival.

Using antibodies contained in the blood of recovered patients is a well-established technique that has been used for several other infectious diseases including diphtheria and influenza.

The study was funded by the European Union’s Horizon 2020 research and innovation programme.

Up until recently outbreaks of Ebola have been small and brought under control relatively quickly, which has meant that there has never been the opportunity for a well-designed study of this therapy.

Dr Semple also leads an ongoing sister study of Convalescent Plasma and Survivors in Sierra Leone (Ebola_CP) with colleagues from the Antwerp study at the 34th Regiment Military Hospital and Ministry of Health, Freetown Sierra Leone, funded by The Wellcome Trust.

Co-ordinating Investigator for the Antwerp Institute of Tropical Medicine, Professor Johan van Griensven, said: “This might not be the answer we had hoped for, but in the absence of a treatment for Ebola it represents crucial information about the role of convalescent plasma against this horrible disease.

“A single administration of convalescent plasma does not save lives, but further analysis will have to reveal whether the amount of antibodies in the donated plasma had an impact on treatment outcomes. In other words, we want to find out whether a more targeted and concentrated use of plasma could help patients fight off Ebola.”

Dr Semple, said: “Convalescent plasma therapy has been used since 1891 to treat severe infectious diseases. We wanted to find out whether Ebola survivor’s plasma contains protective antibodies and if their plasma can be used safely to reduce the number of deaths in this and future outbreaks.

“Further study regarding the effect of higher doses of serum is required. The information we have suggests that there could be subgroups of patients that are more likely to benefit, such as young children and pregnant women.”

The full paper is published in The New England Journal of Medicine and can be found here: http://www.nejm.org/