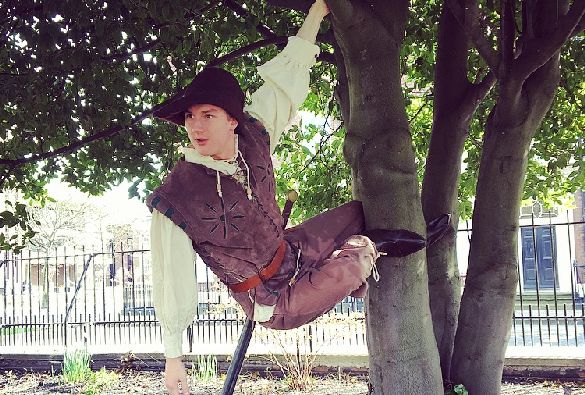 The University of Liverpool’s student theatre company, The Liverpool Players, will take centre stage at Speke Hall this bank holiday with an interative performance of ‘Robin Hood’s May Day Adventure.’

The performance, which takes place around the Rose Garden and lawns of Speke Hall, offers young children a chance to experience early drama and literature in a creative and engaging way.

Professor Sarah Peverley, Director of the Players, said: “It is a privilege to be able to perform once again at such a beautiful and historic venue. Our story takes us through some of the most striking parts of Speke Hall’s extensive grounds – the rose gardens and forest – which really helps to bring Robin’s world to life.”

The Liverpool Players, a University theatre company of students and graduates, will invite their younger audience members to sign-up as ‘Merry Fellows’ to give children the opportunity to become part of the Sheriff of Nottingham’s plan to capture Robin and his men.

Specialising in family orientated events, the Player’s performance provides a fun and educational way of engaging young people and families with folk-tales and storytelling.

Post-graduate student, Madelaine Smart, who will play Maid Marion, said: “In preparation for performing historical plays, I took part in the Arts and Humanities Research Council (AHRC) storytelling programmes in Oxford. The project helped promote and assist the telling of stories to children for events like the Robin Hood performance.”