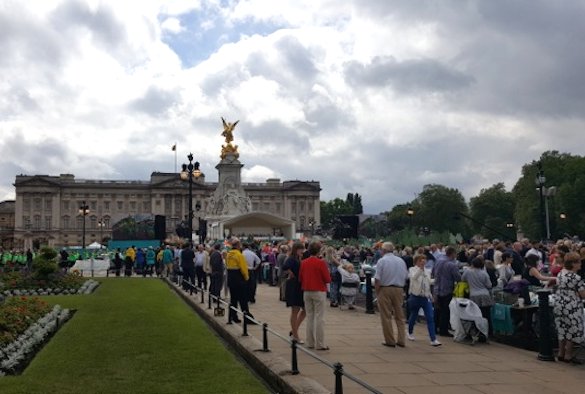 Professor Sarah Peverley from the Department of English represented the University at the Patron’s Lunch as part of the Queen’s 90th Birthday celebrations.

Professor Peverley was chosen by the Vice-Chancellor for her work within the local community and joined the prestigious street party event with her husband Stephen at The Mall, London.

Professor Peverley directs The Liverpool Players, a group of student actors dedicated to performing medieval and early modern literature and drama at public events in Liverpool, including the national Being Human Festival. She has also received a Leverhulme grant for her research into medieval female symbols and contributed to the Edinburgh arts festival, which is supported by the Queen. 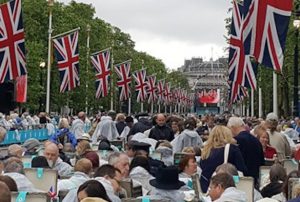 Attendees enjoyed a hamper lunch at the event.

The Patron’s Lunch was attended by over 600 charities and organisations with 10,000 attendees enjoying lunch at tables positioned along the full length of The Mall. Members of the Royal Family joined the proceedings including a drive by through The Mall which was captured by Professor Peverley in the film below:

Professor Sarah Peverley said: “It was a great honour to represent the University and be part of this historic occasion. The atmosphere on The Mall was wonderful despite the rain and it was so humbling to talk to fellow guests and learn about the inspiring work being done by the other charities and organisations. To my surprise, I even got to speak to Princess Anne about Liverpool.”

For more information on Professor Peverley’s work with Liverpool Players go to: https://sarahpeverley.com/liverpool-university-players/.

Further information about The Patron’s Lunch, including pictures from the day are now available at: http://www.thepatronslunch.com/.