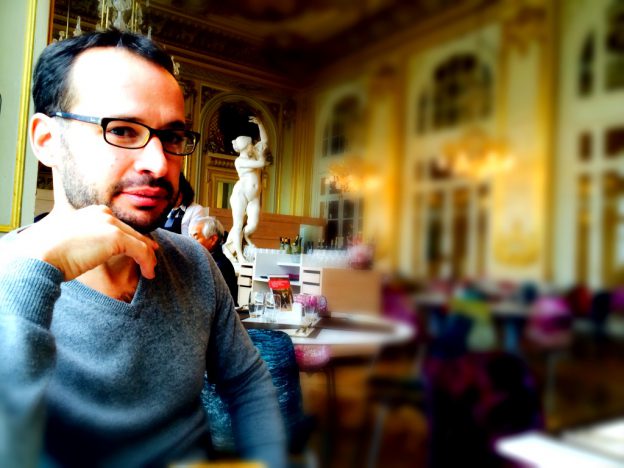 Historian Damien Kempf from the University of Liverpool’s School of Languages, History and Cultures has gained a popular following on social media with regular tweets of surreal medieval imagery.

Damien’s twitter account has so far amassed 26.6k followers twitter and was listed  this year in The Chronicle of Higher Education’s ’15 indispensable academic twitter accounts’.  He has also had a book published with the British Library with Maria L.Gilbert entitled ‘Medieval Monsters’.

Damien speaks to the University about the benefits of using social media to give the public insight into the world of medieval manuscripts:

I began using Twitter in late 2012 to provide glimpses into the medieval world via images found in manuscripts. Medieval images are generally very graphic and creative,  aesthetically close to modern cartoons, and I knew they would be appealing to a broad audience, far beyond the confines of academia. Social media are an excellent a way to share my passion and expertise, using what I encounter daily in my work.

Where do you source your images from?

The bulk of the images I use in Twitter are from the institutions that hold the manuscripts such as the British Library or the Bibliothèque nationale de France. It has been incredibly helpful for my research that so many libraries and museums have digitized their manuscripts collections and it has enabled me to help make them better known and accessible.

Why do you think social media are useful for academics?

Academics use social media as a way to enhance collaboration and share information with colleagues and students about research and teaching. But it is also a way to engage with a wider audience. With its accessibility, ‘immediacy’ and brevity, I have personally found Twitter a particularly useful tool. It is a great way to promote projects and share and receive feedback. It has been especially rewarding that people find medieval images so engaging. They often appropriate them as commentaries on current political and social events.

Has using Twitter opened up new networks to you?

I have done a number of fruitful collaborations with libraries and museums thanks to my Twitter account, and it has been fascinating to see the broad interest generated by medieval images and to engage with all kinds of people from comedians to artists to journalists.

What is your favourite medieval image?

I do not have one favourite but one image stands out for the sensation it caused. I discovered a small drawing in the margins of a fourteenth-century book of papal letters held in the British Library that is the spitting image of Yoda from Star Wars (pictured below). This image really resonated with the public and resulted in coverage from a multitude of media worldwide from The Times to National Public Radio in the U.S. to Paris Match, even making its way into the American celebrity magazine People.