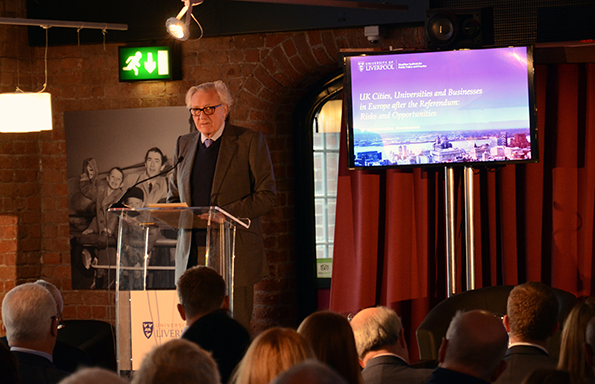 Britain will pay “a price” for the uncertainty created by the vote to leave the EU, according to former Conservative Minister, Lord Michael Heseltine.

Speaking to an audience of public, private and third sector professionals at a University of Liverpool event considering the future of UK cities, universities and businesses following June’s referendum, Lord Heseltine said: “The fact is we are in a serious period of uncertainty.

“Britain is not going to be submerged beneath these economic waves. Britain will be here, Liverpool will be here, but there will be a price to pay for that uncertainty in decisions that are at best delayed and at worst completely changed.”

Lord Heseltine, speaking at Liverpool’s Maritime Museum, reflected that he couldn’t possibly have known how the area would change in the 37 years since he helped lead the resurgence of the Albert Dock, and that this same ‘not-knowing’ applied to Britain’s current position following the EU vote.

Considering the success of Donald Trump, Brexit and looking ahead to the upcoming French and German elections, Lord Heseltine warned that if “people have frozen living standards for a long period of time…they want change” and if the “irritant” of immigration is thrown in “you get a toxic mix”.

Focusing on the vote to leave the EU, he said that public opinion is “not static” and “might change” if the uncertainty continues, with a devalued currency and wages falling behind. He pointed to the by-election in David Cameron’s old seat of Witney, which saw a huge 20% swing to the “European party” – the Lib Dems – and the upcoming Richmond by-election as new “tests of public opinion”.

Lord Heseltine added that if the French and German right wing parties gain power, the right to freedom of movement may be diluted resulting in many “questioning what the main motivation for leaving is in the first place”.

Recalling growing up in a culture where “the assumption was that war followed war” Lord Heseltine said his own position is “totally clear”.

He said: “I’m in favour of Europe for one simple, easily explained reason; because I think it is in Britain’s self-interest.” 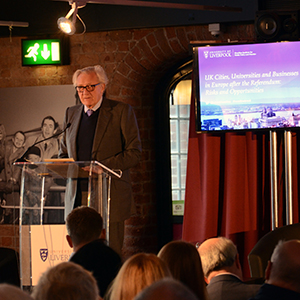