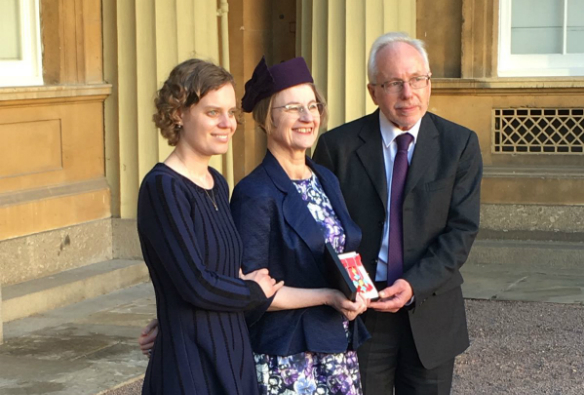 The University’s Pro-Vice-Chancellor for Research and Impact, Professor Dinah Birch, has received a CBE (Commander of the Order of the British Empire) from the Duke of Cambridge at a special ceremony at Buckingham Palace.

Professor Birch received the honour for services to higher education, literary scholarship and cultural life. She chaired the REF2014 sub-panel for English Literature and Language, and was Deputy Chair of the main panel in the arts and humanities.

External roles include chairing the Advisory Council for the University of London’s Institute of English Studies and chairing the Editorial Board of The Conversation.

A regular broadcaster and contributor to the Times Literary Supplement and London Review of Books, Professor Birch also served as a member of the Man Booker prize panel in 2012. She has published widely on Victorian fiction and poetry, and on the work of the critic John Ruskin.

Professor Birch said: “I am truly delighted and deeply honoured to receive this award, which is as much a tribute to the cultural life of the University and the city as it is to my own work.”