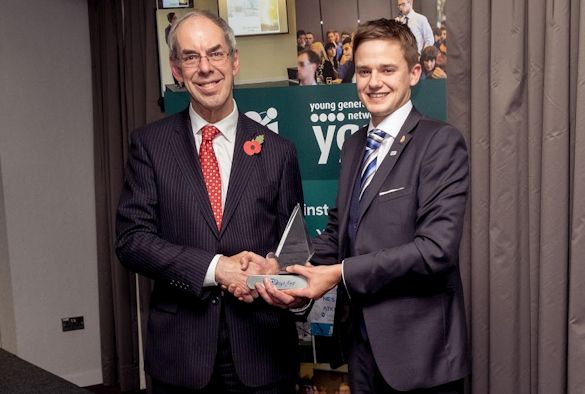 Honorary Visiting Professor John Eldridge at the School of Engineering has been presented with the 2016 Jan Runermark Award for outstanding service, to the benefit of the young generation and young professionals.

John, who currently is Principal Engineer at Cammell Laird Shiprepairers & Shipbuilders Limited, was presented with the 2016 Jan Runermark Award earlier this month.

The Award was created at the European Nuclear Society (ENS) Steering Committee meeting in Dresden on 24 November 1995, in memory of Jan Runermark, the initiator and founding father of the Swedish Young Generation Network (YGN) and promoter of the ENS Young Generation movement.

John Eldridge is a Chartered Engineer and Fellow of the Institution of Mechanical Engineers (IMechE) and has spent most of his career in the nuclear industry working on research and power reactors, irradiated fuel processing, fuel storage and waste treatment plants.

John’s  experience covers design, construction, commissioning and operation of major facilities at Sellafield and other sites in the UK and overseas. In March 2014 John joined Cammell Laird as Principal Engineer after a career spanning many years with Sellafield Ltd in a number of senior engineering and production roles.

In 2016 John was appointed Honorary Visiting Professor to the University of Liverpool’s School of Engineering and is particularly proud of contributing to the development of the next generation engineers and scientists through his presentations, lectures and on the job training opportunities.

His contribution and commitment was recognised by the European Nuclear Society who presented him with the award (pictured).

John is has made presentations at conferences on a range of engineering subjects. Apart from his career with Cammell Lairds, John is also actively involved in the development of the IMechE professional membership and is a lead design judge in the annual Formula Student competition – an interest that extends into involvement in UK motor sport.

More information on the Jan Runemark award is available at: http://www.ensygn.org/ens-ygn-support/jan-runermark/