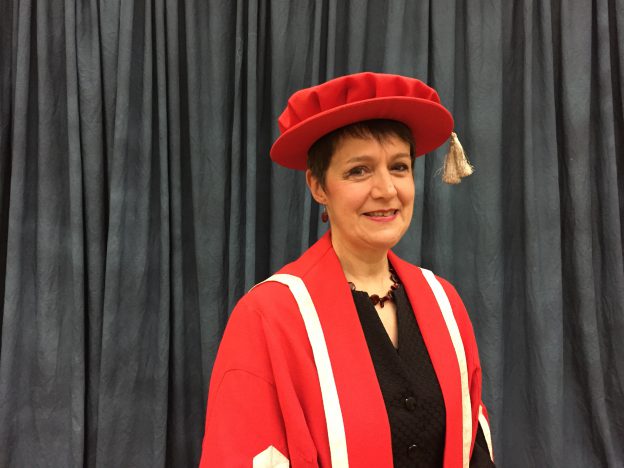 Former Academic Secretary, Catherine Jones, has been recognised with an honorary fellowship from the University.

Catherine is an alumna of the University, and graduated in Classical and Medieval Latin in 1981. She went on to work for a local authority, before returning to the University in 1987, working in areas such as the management of research contracts and scholarships and later managing the University’s governance.

She went on to manage the University’s Teaching Quality division before being appointed Academic Secretary in 2004. Catherine retired from the University in 2015 but remains a trustee of North West Cancer Research and the Wirral Academy Trust.

Catherine was awarded her honorary fellowship by the University’s Vice-Chancellor, Professor Janet Beer.

In his oration, the University’s Public Orator, Bruce Gibson, said: “It was an astute realisation on the part of the University that here was a leader who would always make sure that the institution would take proper account of the interests of its students, something evident from Catherine’s tireless commitment to ensuring the highest standards in teaching.”