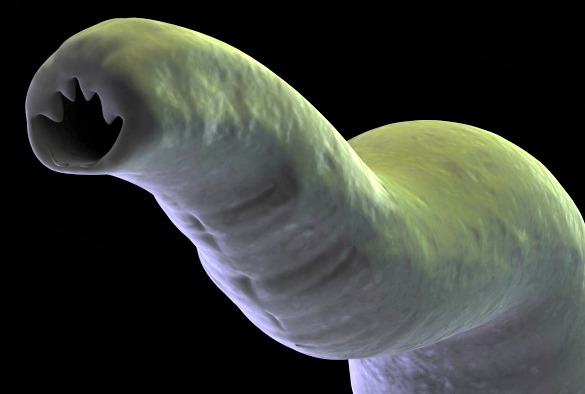 The results of a review of deworming programmes, published in this month’s edition of Lancet Global Health, reaffirms the findings of an earlier review concerning soil-transmitted intestinal worms conducted by researchers from the University of Liverpool and the Liverpool School of Tropical Medicine (LSTM)

About a quarter of the world’s population could have worms living in their guts. For many years experts have recommended treating large groups, particularly children, at risk of infection. Parasites, such as roundworm, hookworm and whipworm could be living inside more than 1.5 billion people according to the World Health Organization (WHO).

Children are usually infected through contaminated food but hookworm larvae can also burrow into feet, get into blood vessels and make their way to the heart and lungs. From there they can climb up to the oesophagus and be swallowed, ending up in the gut where they grow.

Worms are not usually fatal but in serious cases they can cause abdominal pain, diarrhoea, loss of appetite, weight loss, fatigue and anaemia. In children, they are associated with malnutrition, stunted growth, and absences from school, but it is unclear if the worms are the cause.

Treatment costs are cheap per individual treated but have to be delivered to huge numbers of children. This has contributed to the idea that in areas where parasitic worms are common, all children should be routinely treated, regardless of whether they are showing any signs of infection – an approach supported by the World Health Organisation.

The Campbell systematic review, which analysed a large number deworming studies, has confirmed the findings of the earlier joint University and LSTM Cochrane review which stated deworming programmes had ‘little to no impact’. These types of studies bring together all the high-quality trials the researchers can find both published or unpublished.

One of the original review authors, Dr David Taylor-Robinson, Department of Public Health and Policy, University of Liverpool, said: “The Campbell review strongly corroborates our findings. This is important since not all systematic reviews on the same topic reach the same conclusion.

“The Cochrane review stimulated heated debate and has been criticized by deworming advocates. In this case the Campbell replication – which included other study designs alongside randomized control trials – reaffirmed our findings which found no evidence of mass treatment having an impact on weight, height, haemoglobin, exam performance or mortality.

“Given the areas in which worms are most prevalent are often very poor there are usually other factors affecting the health of these children. Furthermore, living conditions are improving in many parts of the world and so the prevalence of worms and the number of serious infections is decreasing.”

Professor Paul Garner, LSTM, said: “Donors and philanthropists want magic bullets to eradicate poverty. The Cochrane review has shown clearly that deworming advocates have exaggerated the benefits of these programmes.

“With Cochrane and Campbell having such similar findings, the World Health Organization, policy makers and philanthropists need to take heed of the evidence and adjust their policies and investments”

The full editorial, entitled ‘Campbell replication confirms little or no effect of community deworming’, can be found here.