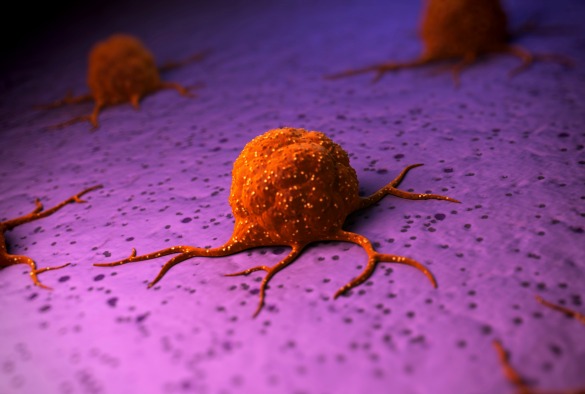 Researchers from Liverpool have identified a new way to kill certain cancer cells – by starving them of a key nutrient. The finding could lead the way in more personalised treatment of certain cancers.

In a paper published in the journal Cell Reports, scientists including Ioannis Poursaitidis and Xiaomeng Wang from the University’s Institute of Translational Medicine and Dr Richard Lamb from Liverpool Hope University, share the results of their investigations into human breast cancer epithelial cells and non-small cell lung cancer cells.

The research was funded by Cancer Research UK.

The team, which also includes researchers from the USA, discovered that starving cancer cells with a particular faulty gene of the amino acid nutrient cystine generates hydrogen peroxide.

The speed and synchronisation of the cell bursting creates what Dr Lamb calls a ‘wave of destruction’ for the cancer cells.

Amino acids are used in every cell of the human body to build the proteins we need to survive. There are more than 20 types of amino acids.

The scientists were able to make their discovery after using a technique of creating “gene-edited” cells. They took the genome of a normal cell and changed it by genome editing to generate mutations found in human breast cancer epithelial cells and non small cell lung cancer cells, on which they carried out their tests and compared them to normal cells.

“Previous research has shown that overall amino acid abundance may be higher in cancerous tissue, suggesting an increased need for amino acids in some tumours.

“Using our method, we have been able to identify the amino acid cystine as a ‘fuel’ that keeps certain cancer cells going. By eliminating that ‘fuel’ we can, in effect, starve the cancer cells to death.”

While testing the effect of drugs that deplete cystine on humans has not yet taken place, Dr Lamb believes that in the long term, these results could pave the way for more targeted cancer treatments.

“If we can find out which amino acid nutrients other forms of cancer depend on, we could create much more personalised and efficient therapies for people, depending on the type of cancer they have. This is of course sometime in the future, but we believe that this research has uncovered a new way forward in targeting cancer.”

Dr Emma Smith, Cancer Research UK’s science information manager, said: “Figuring out how cancer cells get nutrients, and looking into ways to cut off their supplies is a promising tactic to try and find new treatments that starve cancers.

“The next steps will be finding out if this approach can be developed into a new drug, and if it’s safe and works in people with certain types of cancer.”