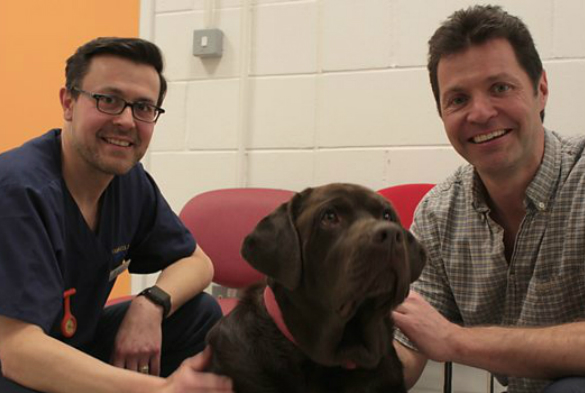 The University of Liverpool’s Institute of Veterinary Science is coming to prime time as part of the new Trust Me I’m A Vet series, which begins tonight on BBC2.

There are almost 60 million pets in the UK and, from flea collars and worm treatments to vaccinations and vet bills, pet owners now spend tens of billions of pounds a year on their health. But what do our pets really need to have a long and healthy life?

In this new series, TV vet Steve Leonard and a team of practising vets use the latest veterinary research and interview world-leading experts to seek out the very best advice for taking care of your pet.

Each episode of the three-part series will be based at one of the country’s leading vet schools. Episode two, which airs on Wednesday, 10 May, comes from the University’s Institute of Veterinary Science.

In the second episode Professor Alex German, head of the University’s Weight Management Clinic, runs a unique experiment to tackle the biggest health problem for pets in the UK today: obesity. The team recruited groups of overweight dogs to work out the best way for pets to lose weight.

Professor German, said: “Obesity is common in dogs and can lead to a range of illnesses and diseases.

“To get dogs to lose weight we basically ask owners to feed them less and exercise them more. Whilst both are important, it is not currently known which is most important.

“In this trial, which is a world first, we randomly assigned dogs to two groups, one focusing on diet, the other focusing on exercise.  Of course, you’ll have to tune in to discover what we found!”

Many staff and students from the Institute were involved in the filming, both behind the scenes and in front of the camera.

Dr Vanessa Schmidt and Professor Nicola Williams are filmed in the lab for episode two as part of a feature on whether feeding pets raw food could be bringing dangerous bacteria into the home. Meanwhile, in episode three, dog-behaviour expert Dr Carri Westgarth highlights the warning signs dogs give out before becoming aggressive, and how they can escalate if ignored.

Trust Me I’m A Vet begins on BBC2 tonight (Wednesday, 3 May) at 8pm. For further information, please visit: http://www.bbc.co.uk/programmes/b08pn8jf