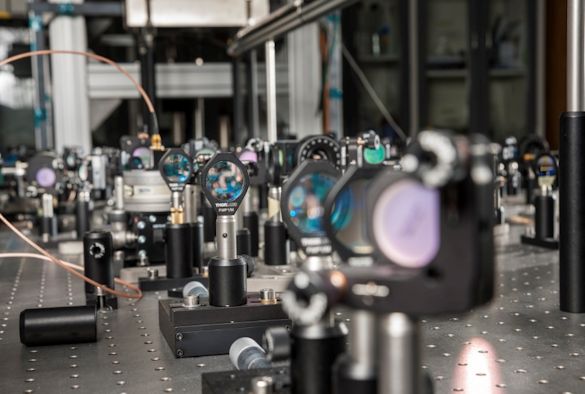 Physicists from the University have made a huge step forwards towards building a novel experiment to probe the “dark contents” of the vacuum. What we see, normal matter and light, only accounts for a about 5% of the universe. Understanding the remaining 95% (the dark content) remains of the greatest challenges for fundamental physics in the 21st Century.

A novel experiment to probe the dark universe was co-initiated by Dr Jon Coleman, a Royal Society Research Fellow in the Department of Physics, together with Nobel Laureate Martin Perl  (a visiting Professor at the University of Liverpool from 2011, until his passing in 2014). The unique experiment relies on “quantum interferometry” using ultra cold atoms. This is based on one of the most challenging modern experimental techniques of cold atoms (itself awarded a Nobel prize in 1997), called atom interferometry.

In a paper released to ArXiv, the research group present their results demonstrating interference, using low cost equipment and sophisticated control systems which are a synthesis of their work at Stanford, electronics expertise from the T2K neutrino experiment in Japan, and motivated by a vision for a new way to probe the universe.

There are only a handful of working atom interferometers in Europe and none configured to probe the dark universe. This marks a great advance in the university’s ability to use the quantum nature of atoms.

Liverpool Physicist, Dr Jon Coleman, said: “This is certainly one of the most difficult things that I have attempted and has taken years of dedication. This would never have been possible without the fantastic team of staff and graduate students that are involved in the project, and the encouragement from my colleagues. We are excited because this apparatus can be used for so many things as well as probing for dark energy. Potential applications range from navigation to gravity scanning.”

Professor Themis Bowcock, Head of the University’s Particle Physics group, commented: “This is a critical new addition to way that fundamental physics will be done in the next decades. This technique could be as important as utilization of accelerators at CERN.

“We want Liverpool to be at the forefront of developing these technologies for studying the cosmos. We are very proud to be able to have given Jon the intellectual room, and the support, to complete the first stage of his programme.”

Quantum Technology is estimated at a £1billion industry for the UK and quantum technologies are expected to have applications across multiple future multi-billion-pound industries in many markets and sectors.