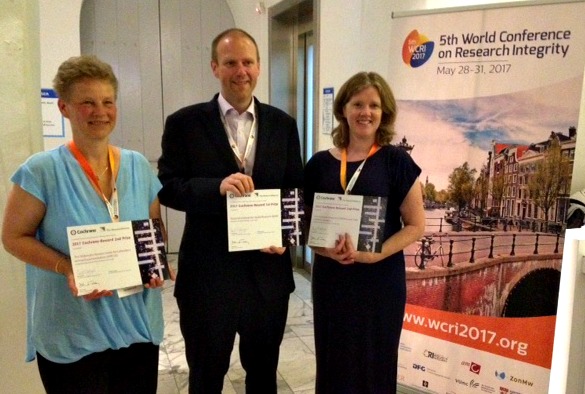 Professor Paula Williamson from the Department of Biostatistics received a prize on behalf of the COMET Initiative for reducing waste in research from the Cochrane-REWARD competition.

Cochrane is a global independent network of researchers, professionals, patients, carers, and people interested in health. More than 37,000 contributors from 130 countries work together to produce credible, accessible health information that is free from commercial sponsorship and other conflicts of interest.

The Cochrane-REWARD prizes highlight both underused “remedies” and the need to invest in research to identify problems and solutions to them.

This year’s winners were the Adding Value in Research programme of the UK National Institute for Health Research (NIHR), the Systematic Review Center for animal Experimentation (SYRCLE) in Nijmegen, Netherlands, and the Core Outcome Measures in Effectiveness Trials (COMET) Initiative.

The COMET Initiative,  co-founded by Professor Williamson, Head of the University’s Department of Biostatistics and Director of the MRC North West Hub for Trials Methodology Research, is bringing people interested in the development and application of core outcome sets (COS) together.

Professor Paula Williamson, said: “There is a growing awareness about problems caused by inconsistency in the outcomes measured in clinical trials and the work that the COMET Initiative is doing to try and combat this.

“As part of the COMET Initiative the researchers have developed a database of COS for use in clinical trials. The importance of the use of COS is increasingly recognised by research funders, with the National Institute for Health Research’s Health Technology Assessment programme in the UK, the Health Research Board in Ireland and the charity Arthritis Research UK, all now highlighting this to people seeking funding for new studies.”

The new COMET handbook has recently been launched and more details can be found here.

The Lecture ‘Improving health by improving trials: from outcomes to recruitment and back again’ can be seen here.