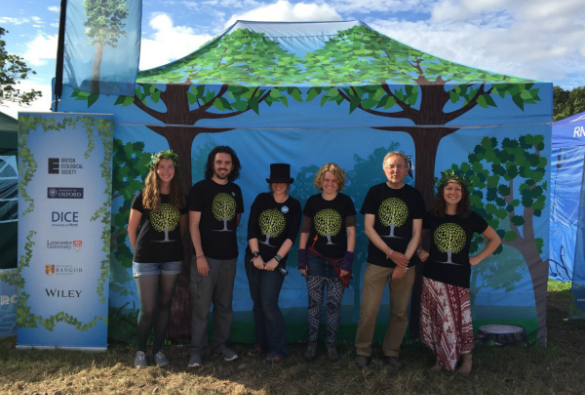 Jo Griffin is a PhD student in evolutionary ecology at the Institute of Integrative Biology:

“What happened in June 2017? The General Election, summer solstice, Lions vs New Zealand… OK, so various big events occurred in the month of June, but the highlight for me was the creation of a pop-up city with a population of around 175,000 people. I am of course referring to Glastonbury Festival, where people congregate at Worthy Farm in Somerset to watch music, comedy, dance, circus and other arts.

I formed part of team of six ecologists from around the UK, headed up by Lancaster University’s Emma Sayer, who took ecology to the Glastonbury. Why take ecology to Glastonbury? Aside from the music and vibrant atmosphere, we could engage with hundreds of members of the general public, over the course of just five days. This opportunity does not often occur. Based in the Green Futures field, we shared our pitch with campaigners, visionaries, environmentalists and artists with a passion for sustainability.

This was the third year the ‘Sex & Bugs & Rock ’n Roll’ tent exhibited at Glastonbury, albeit my first. This year we had a woodland ecology theme. In the tent we had a collection of new and old ecological activities to offer, including the infamous ‘Whose Poo?’ and ‘How gross is your festival kit?’ There were mixed reactions to the latter. When given the opportunity to have a swab taken from an item of their festival kit and have it spread it on an agar plate, some punters shrivelled up their nose in distaste and replied ‘no thank you’! But the vast majority revelled in the opportunity to see the microbes that were present on their wristbands.

We also teamed up with National Trust Scotland, and for every group/individual who participated in ‘Create you Ideal Woodland’, a native tree will be planted. In the tent, you could also learn about the various woodland invertebrate species that we had on display, including earthworms, dung beetles and orange ladybirds. Did you know we have around 60 species of dung beetles in the UK that are dependent on dung? Without them we would have had to wade through ankle-deep cow dung at Worthy Farm – eugh!

While engaging with punters is extreme fun, busking on what was simultaneously the hottest June day since 1976 and the longest day of the year was tough. But fortunately we didn’t have to negotiate the churned mud bath of the previous year. In total we engaged with over 1000 members of the public during the five days, and many of these were high level interactions, lasting over 30 minutes in length. What a success! Never before have I been asked so much about, and had so much interest in the research I carry out for my PhD.

None of this would have been possible without Emma, who organised and designed the tent with the aid of collaborators and funding from the British Ecological Society (BES), Bangor University, University of Kent, Wytham Woods (University of Oxford), Lancaster University and Wiley. Not forgetting the rest of the volunteers: Ali Birkett, Nick Loughlin, Hannah Griffiths and Nigel Fisher, who shared their enthusiasm and love of ecology with festival-goers, and provided fantastic company (and dancing) throughout the week. Finally, the biggest thanks goes to the 1000 punters who gave up their time to talk to us.”

You can find more information about ‘Sex & Bugs & Rock ‘n Roll’ at: www.festivalbugs.org