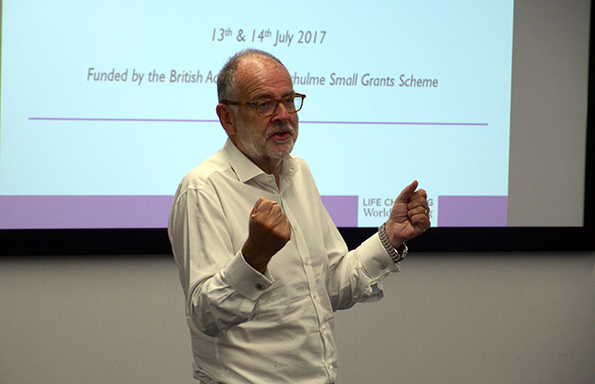 Speaking at a public event organised by Dr Mike Gordon, in the University of Liverpool’s School of Law and Social Justice, Lord Falconer discussed the introduction of the Human Rights Act, Freedom of Information, the Supreme Court and devolution, as well as Lords reform and the impact of the Good Friday Agreement to secure peace in Northern Ireland.

He described the challenges faced by a new regime keen to “show leadership”, following an “extremely unpopular” and “socially conservative” government that had “not engaged in any constitutional reform for 18 years”.

Referring to the Good Friday Agreement, implemented in the spring of 1998, Lord Falconer described an “incredibly bold and essentially successful constitutional move”. And while he considered reform of the House of Lords less wide-ranging than originally hoped, he believes changes introduced by Labour “absolutely transformed the Lords into an effective voice against a powerful government”.

The former Lord Chancellor called the Human Rights Act “hugely significant” and an “unmitigated success”. And while much of the opposition to it stemmed from an “unfair” media keen to highlight its use by “criminals and terrorists”, Lord Falconer said it would be the only legal instrument “protecting a couple in a nursing home who were going to be separated in their 90s”.

He said: “The media were very opposed to the Human Rights Act because they feared it might be easier for injunctions to be obtained against them.”

Lord Falconer said he believes the Freedom of Information Act “makes government much less careless”, and speculated on how it may have benefitted the pursuit of justice around the Hillsborough disaster had it been in place at the time.

And while he expressed disappointment at the inability to deliver regional devolution in England, following its rejection in a public plebiscite in the north east, he considered Scottish and Welsh devolution essential due to the “dysfunctional” relationship inherited from the previous government.

He added that he believes changes implemented to introduce a Supreme Court for the first time were “wholly beneficial”.

Considering the state of the UK today, Lord Falconer said: “How can it be that in less than two-and-a-half years we have had two Prime Ministers who have gone from hero to zero in two months?

“How, after a general election, can we have a government that has no authority?

“We’re about to undergo the biggest constitutional change in living memory and nobody knows what the direction of travel is in relation to that.

“We’ve lost political leadership. Is the cause of that the constitutional arrangements or is it because we can’t agree as a country?

“I think it’s extremely unlikely to be the latter.”

Lord Falconer was speaking at Twenty Years On: Assessing the State and Legacy of New Labour’s Constitution conference, running from July 13 to 14. It was funded by British Academy and Leverhulme Small Grant scheme.