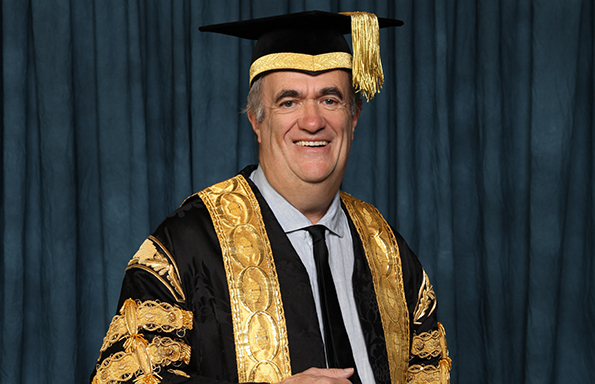 Author, journalist and playwright, Colm Tóibín has been installed as University of Liverpool’s new Chancellor.

Colm, whose best-selling novel, Brooklyn was transformed into an Oscar-nominated film, was joined on stage for the special ceremony at Liverpool Philharmonic Hall by University of Liverpool Vice-Chancellor, Professor Janet Beer.

The installation of the new Chancellor opens a week of graduations across the disciplines at University of Liverpool.

In his speech, Colm touched on his modest background where “the book, the word and study” were considered “sacred”, and praised Liverpool as a “symbol for great openness”.

Following his unveiling, he said: “I think it’s just great for the students to have a day like this, where they can dress up and look important.

“And it’s great for the parents to realise what they have done, to have brought up a child who is now walking up and getting a degree.”

Colm follows in the footsteps of former Chancellor, Sir David King who performed the role between 2009 and 2013.

And he revealed it’s not a position he thought he would ever undertake.

Colm said: “If there had been an advert in the paper, I would have said that I’d never get that job because they would ask me some hard question about policy!

“But I know this job is ceremonial, and I’m happy with that.”

He hailed his appointment as further evidence of the strengthening of ties between England and Ireland, and also that Liverpool is a city “that welcomes all people”.

Colm said: “It’s not only a question of being Irish, but also being gay.

“Things have changed so much in our world; in the relationship between Ireland and England, but also being gay and in a position of authority, being gay as the Chancellor of a university.”

He said he hoped students would consider him “approachable”, and promised that his new role would not make him “pompous”.

Reflecting on the day, he added: “I don’t think it’s a day the students will forget.

“You just have to look at the clothes people are wearing to see that people have gone to considerable expense and trouble.

“For the rest of the day, children and parents will be rebonding. It’s something they won’t forget.”