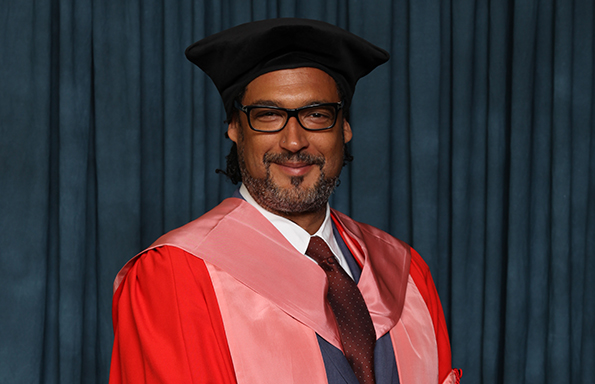 University of Liverpool alumnus and broadcaster, David Olusoga advised graduates to “be lucky” as he accepted his Honorary Degree of Doctor of Letters.

Following his conferment by Vice Chancellor, Professor Janet Beer, the historian, who was born in Nigeria, spoke to assembled graduates and their families at Liverpool Philharmonic Hall.

David Olusoga recalled is own graduation ceremony in the same building 22 years earlier.

He said the best advice he had been given at the time was to “not worry” and “be lucky”, which he conceded was “difficult to put into action”.

But he added that the world he was urged not to worry about was “more benign and friendly” than today.

David Olusoga said: “I graduated into a world that treated young people better than your generation is being treated.

“Your generation has been the accepted collateral damage for political systems over the last 25 years.

“But you’re voting, and you’re registering to vote and I feel your generation is fighting back, stopping yourselves being treated in the way successive political parties have treated young people.

“Never accept anyone who tells you you’ve got it easy, or you don’t know how hard things are.

“In the past, that used to be true.

“But your generation is not naïve about the difficulties of life, because in many ways we have failed you.”

David Olusoga has become a familiar face on British television screens, and his most recent series include Black and British: A Forgotten History, The World’s War and the BAFTA winning Britain’s Forgotten Slave Owners.

He is also a regular presenter on The One Show and is one of three presenters on the BBC’s new landmark arts series Civilisations. He has also written a number of books, and contributes regularly to The Guardian, The Observer and BBC History Magazine.

David graduated from University of Liverpool’s Department of History before going on to study broadcasting at Leeds Trinity University.