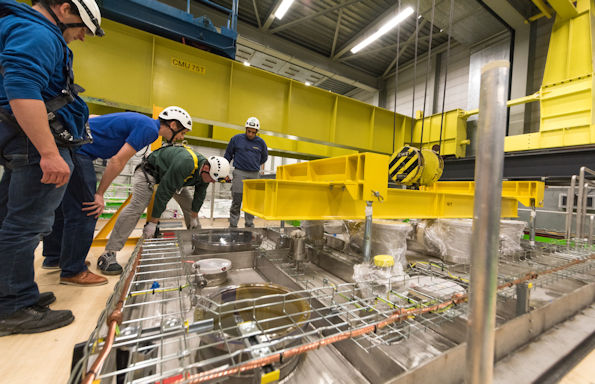 Physicists from the University are key partners in a flagship global science project based in the United States that could change our understanding of the universe.

The UK Government is investing £65million in the Long-Baseline Neutrino Facility (LBNF) and the Deep Underground Neutrino Experiment (DUNE) which will study the properties of mysterious particles called neutrinos, which could help explain more about how the universe works and why matter exists at all.

Announcing the investment in DUNE, Science Minister, Jo Johnson, said: “Our continued collaboration with the US on science and innovation is beneficial to both of our nations and through this agreement we are sharing expertise to enhance our understanding of many important topics that have the potential to be world changing.

“The UK is known as a nation of science and technical progress, with research and development being at the core of our industrial strategy.  By working with our key allies, we are maintaining our position as a global leader in research for years to come.”

The UK’s Science and Technology Facilities Council (STFC) will manage the UK’s investment in the international facility, giving UK scientists and engineers the chance to take a leading role in the management and development of the DUNE far detector and the LBNF beam line and associated PIP-II accelerator development.

Professor Christos Touramanis, leader of the University’s DUNE team said: “DUNE is a game changer in the international neutrino programme. The UK government’s decision to make an investment of this magnitude recognizes DUNE’s large discovery potential and vindicates the UK scientists who have been contributing to and leading the collaboration in recent years.

“Our Liverpool team is one of the largest ones in the country with 15 members including 4 academics. We are leading a multimillion DUNE prototyping programme currently under construction at CERN and we have important responsibilities in the projects that will utilise the investment announced today to design and deliver key instruments and systems at the heart of DUNE.”

Head of Liverpool ‘s Particle Physics Group, Professor Themis Bowcock added: “This is a huge step forwards for UK’s neutrino programme and another success for Professor Touramanis and his team. It follows on from the Breakthrough Prize (2016.) This pillar of our research now offers our new and prospective PhD students opportunities to contribute to some of the grand challenges of physics, including understanding the nature of the matter-antimatter imbalance in the universe.”

Chief Executive Designate at UK Research and Innovation, Sir Mark Walport, said:  “Research and innovation are global endeavours. Agreements like the one signed today by the United Kingdom and the United States set the framework for the great discoveries of the future, whether that be furthering our understanding of neutrinos or improving the accessibility of museum collections.

“Agreements like this also send a clear signal that UK researchers are outward looking and ready to work with the best talent wherever that may be. UK Research and Innovation is looking for ward to extending partnerships in science and innovation around the world.”

DUNE will be the first large-scale US-hosted experiment run as a truly international project at the inter-governmental level, with more than 1,000 scientists and engineers from 31 countries building and operating the facility, including many from the UK.  The US is meeting the major civil construction costs for conventional facilities, but is seeking international partners to design and build major elements of the accelerator and detectors.  The total international partner contributions to the entire project are expected to be about $500M.

Dr Brian Bowsher, Chief Executive of STFC, said: “This investment is a significant and exciting step for the UK that builds on UK expertise. International partnerships are the key to building these world-leading experiments, and the UK’s continued collaboration with the US, through STFC, demonstrates that we are the science partner of choice in such agreements.

“I am looking forward to seeing our scientists work with our colleagues in the US in developing this experiment and the exciting science which will happen as a result.”

One aspect DUNE scientists will look for is the differences in behaviour between neutrinos and their antimatter counterparts, antineutrinos, which could give us clues as to why we live in a matter-dominated universe – in other words, why we are all here, instead of having been annihilated just after the Big Bang. DUNE will also watch for neutrinos produced when a star explodes, which could reveal the formation of neutron stars and black holes, and will investigate whether protons live forever or eventually decay, bringing us closer to fulfilling Einstein’s dream of a grand unified theory.

The LBNF will be the world’s most intense high-energy neutrino beam. It will fire neutrinos 1300 km from Fermilab in Illinois towards the 70,000 ton DUNE detector at the Sanford Underground Research Facility (SURF) in South Dakota in order to study neutrino oscillations. Once constructed, it will operate for at least 15 years undertaking a broad and exciting science programme.

More information about the facility and experiment can be found at: http://lbnf.fnal.gov http://dunescience.org