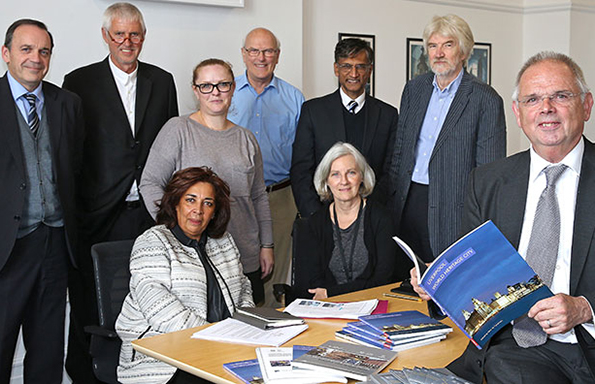 Professor Michael Parkinson, the University’s Pro Vice-Chancellor for Civic Engagement, said he was “delighted” to be invited to join the World Heritage Board at the request of Mayor of Liverpool, Joe Anderson.

The creation of the board follows a city symposium organised by University of Liverpool in June, that sought to respond to UNESCO’s declaration of ‘deep concern’ over the impact of city development plans on the existing World Heritage Site (WHS).

Professor Parkinson said: “I was delighted to be asked by the Mayor to join his Advisory Board at this really crucial time. It underlines the University’s involvement in and commitment to civic engagement.

“And it gives us a real opportunity to provide the robust evidence the city needs to make the best case possible to UNESCO and save its World Heritage Status. I believe that working together we must – and will – win this argument.”

Joe Anderson says he has written to Heritage Minister, John Glen MP to inform him of the board’s creation, and his desire to work more closely with Government to “reset the relationship with UNESCO”, who administer the WHS programme.

Sir David Henshaw, who is now Chairman of National Museums Liverpool, said: “Liverpool’s track record in preserving its unique heritage is beyond question. What has been unfortunate is that the need for economic growth and job creation has clouded the fact that heritage is actually a key ingredient in achieving those goals.

“Liverpool has achieved a huge amount since 2004 in investing in its historic assets but has somewhere along the way failed to demonstrate how this is shaping the city’s future.

“I’m delighted to have been asked to chair this new board and look forward to working with our partners, both in the city and in Government, to achieve a new understanding with UNESCO and show how the city can address the concerns it has raised. As the Mayor has said, this is a huge opportunity for Liverpool to showcase why its World Heritage Status is an asset and how it is being utilised to engineer new investment and growth.”