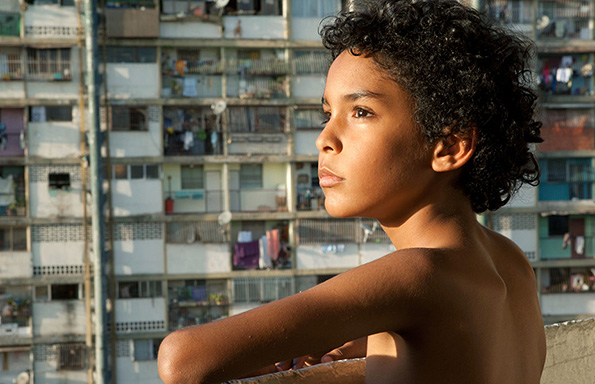 A total of nine films will be showcased in the University’s Central Teaching Hub between Thursday October 26 and Friday November 3.

The Festival is organised by Ana Reimao and Dr Niamh Thornton in the University’s Department of Modern Languages and Cultures.

Ms Reimao said: “After the department’s successful collaboration with the now-closed Liverpool Small Cinema last year, it was clear that there is an audience in Liverpool for films beyond your usual blockbuster, an audience who want to be challenged by what they are watching and who want to find in films an echo of their own concerns.

“We were touched that so many people wanted to stay for the discussions after screenings. These discussions certainly enriched our experience of the films and we hope that now people will want to come back for more.”

The Festival opens on October 26 with a free screening of Augustí Villaronga’s 2010 Catalan language film, Pa negre or Black Bread. This is followed on October 27 by a free showing of Jorge Dorado’s 2015 Spanish language feature, Teresa which considers St. Teresa of Avila through the eyes of a young girl.

After a break for the weekend, the festival returns on Monday October 30 with Gonzalo Diaz’s 2013 film, I am from Chile, which follows a young man who moves to London from Chile to study English.

The first of the Festival’s two UK premieres takes place on October 31 as 2013 feature Asier and I, which takes place in the highly politicised 1980s Basque country, is followed by a skype Q&A with director, Aitor Merino.

November 1 brings two screenings in one day, starting with 2013 Eva Vila feature, Bajarí: Gypsy Barcelona, which takes a close look at flamenco culture in Barcelona, before the action moves across the Atlantic to Argentina for Guaraní (Luis Zorraquín, 2015), where the audience follows fisherman Atilio as he travels with his granddaughter to Buenos Aires.

The next day brings the UK premiere of 2016 Portuguese language title, Where I Grow Old which explores the relationship between two women and their seemingly contrasting views on life in Belo Horizonte, Brazil.

The Festival closes on November 3 with a screening of highly regarded 2013 Venezuelan title Pelo Melo or Bad Hair.

Dr Niamh Thornton said: “The theme this year reflects the ever-shifting borders that are in the headlines daily as well as the small internal borders that determine individual identities.

“We have chosen films that tell stories to help understand other people’s lives when they are faced with big questions and moments of significant changes.

“We are working with U.S. distributors PRAGDA and we are excited to be the first university in the UK to be awarded a PRAGDA Spanish Film Club grant and to be able to share these films with a local audience.

“The first film, Pa negre (Black Bread), the first Catalan film to be submitted for an Oscar, tells a story of a family caught up in the turmoil of the Spanish Civil War from a child’s perspective.

“We invited Dr Joan-Lluís Marfany to lead the post-viewing discussion and, as he is a specialist in Catalan Studies who has focused largely on the idea of nation-building, we look forward to whatever light he might shed on the region that has been on the news so prominently recently.”

The Iberian and Latin American Film Festival takes place between Thursday October 26 and Friday November 3 in the Central Teaching Hub, University of Liverpool. For more information, and to book your tickets, please visit: https://www.liverpool.ac.uk/modern-languages-and-cultures/latin-film/