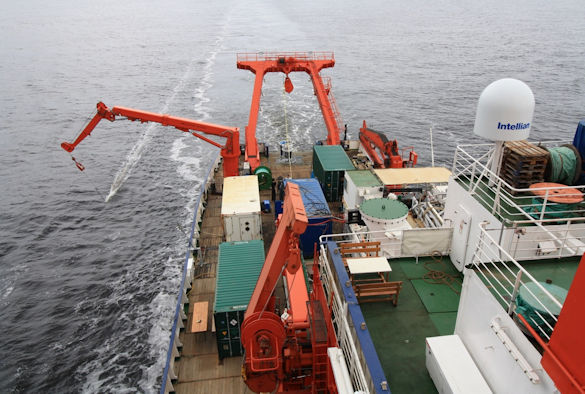 An international research team, including the University of Liverpool, has found that the growth of phytoplankton over large extents of the ocean is not limited by a single nutrient, but by multiple nutrients simultaneously.

In a paper published in the journal, Nature, the team shows using experimental evidence that over extensive regions of the South Atlantic a combination of at least two nutrients was needed to stimulate any phytoplankton growth, while in some cases three separate nutrients were needed to maximize growth.

Phytoplankton — unicellular photosynthetic microbes – play a fundamental role in the global carbon cycle and fuel marine food webs. Globally, phytoplankton productivity is regulated by the availability of essential nutrients, such as nitrogen and iron.

However, the supply rates of nutrients to the surface ocean are changing. Such changes will almost certainly influence phytoplankton productivity and go on to impact marine food webs and the carbon cycle

To find out how these changes might affect phytoplankton productivity, it is important to know which nutrients limit phytoplankton growth in the ocean. Measurements of nutrient concentrations in the ocean have shown widespread depletion of multiple elements simultaneously. However, to date, no experimental studies have convincingly demonstrated so-called ‘co-limitation’ of growth by more than one nutrient over large extents of the ocean.

For the study, researchers from the University of Liverpool, the GEOMAR Helmholtz Centre for Ocean Research in Germany, Dalhousie University in Canada and the University of Southampton undertook a research expedition on the German research vessel METEOR off Southwest Africa from November–December 2015 to collect and analyse water samples along the 1000s of kilometers of cruise track.

Nutrients (nitrogen, iron, and cobalt) in all possible combinations were added to the water samples and incubated in an environment simulating the ocean.

Lead author of the paper, Dr Thomas Browning from the GEOMAR Helmholtz Centre for Ocean Research Kiel, said: “Nutrient co-limitation has been proposed many times before. However, we were able to prove it experimentally over large oceanographic extents for the first time.

“The experimental setup sounds quite simple. However, the technical implementation of these types of experiments is actually complex as we need to ensure absolutely no contamination of the experimental chambers with trace elements. This is a challenge because these elements are found almost everywhere on ships—even on new plastic surfaces. Phytoplankton are also very sensitive to light and temperature so special care had to be taken when collecting and preserving these samples”.

Spatial patterns in nutrients limiting phytoplankton growth were also found. While in some samples nearer the coastline a single nutrient significantly increased plankton growth, at least two nutrients were needed to stimulate growth in samples taken from the open ocean.

“Another key finding was that we found these distinct limitation regimes could be reconciled with the measured nutrient concentrations in the ambient seawater,” he added.

This additional result is significant as it suggests the potential for making larger scale predictions about nutrient limitation using new data from programmes like GEOTRACES—a large international effort to map nutrient concentrations in the ocean. The results also have implications for global ocean models which are used for projecting the impacts of climate change.

Dr Alessandro Tagliabue, co-author and Reader in Ocean Sciences at the University of Liverpool, said: “Based on our study, it is likely that few IPCC-type models are able to represent the environmental conditions that favour co-limitation, raising uncertainty regarding their predictions of the impacrs of climate change. Improving the ability of such models to reproduce co-limitation is a key goal of a European Research Council Consolidator grant study, which I was awarded earlier this year.

“These kinds of time consuming experimental results are crucial in pointing the way forwards for improving ocean biogeochemical models. In doing so we will be able assess how important the phenomenon of co-limitation is to future ocean change.”

The paper`Nutrient co-limitation at the boundary of an oceanic gyre’ is published in Nature (doi.org/10.1038/nature24063).

Image below: Cruise transect through the South East Atlantic, plotted on a background of satellite-derived chlorophyll-a concentrations (an average for December 2015). The white dots indicate the locations of the eleven bioassay experiments. 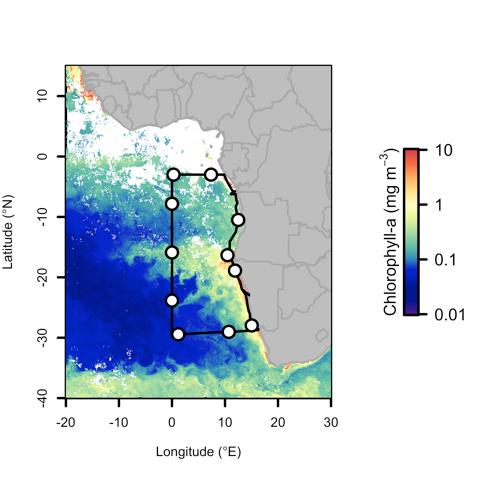